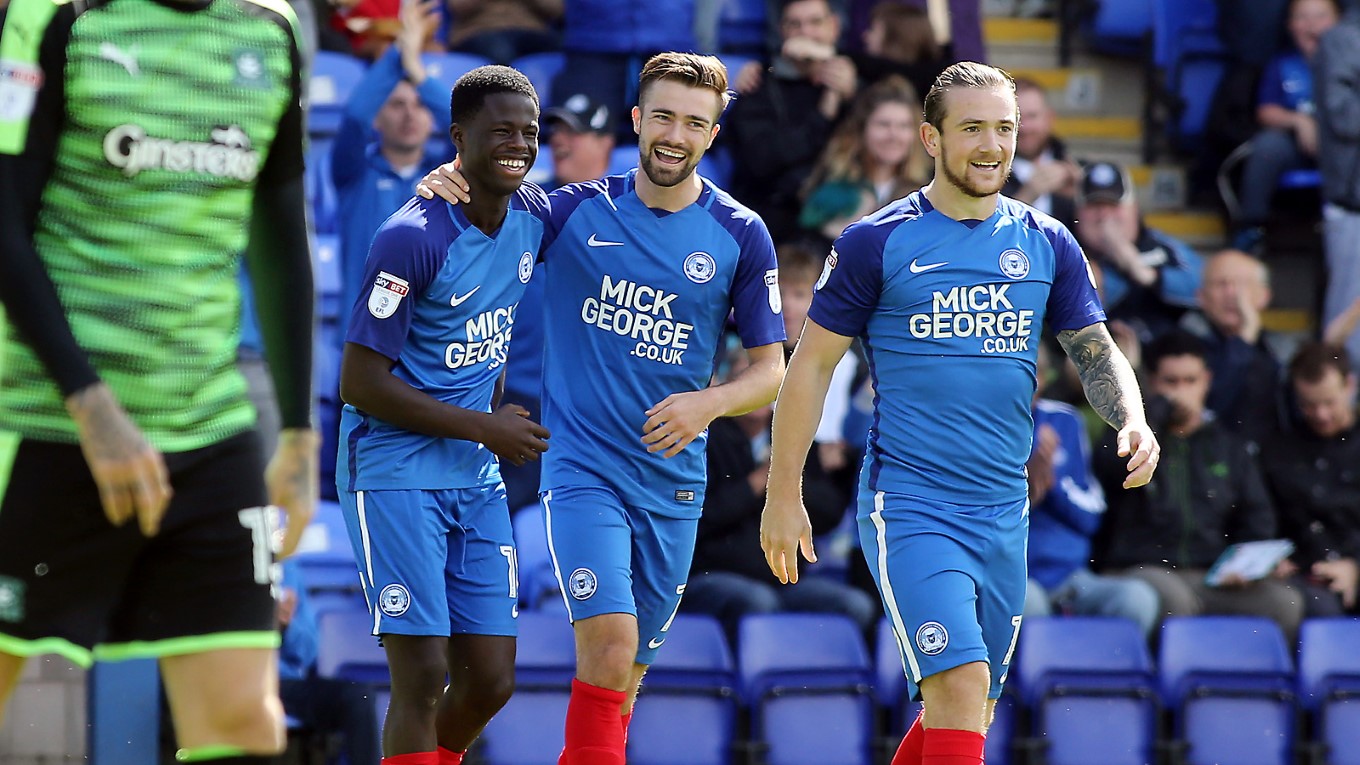 Junior Morias on the score-sheet as Posh clinch three points in front of a packed ABAX Stadium.

Peterborough United withstood some nervy moments and at times were indebted to goalkeeper Jonathan Bond, but claimed an opening day success with a deflected Leo Da Silva Lopes effort and a Junior Morias finish securing all three points over Plymouth Argyle.

Grant McCann’s men made the perfect start to the game as a cross from Leo Da SILVA LOPES took a huge deflection and squirmed past goalkeeper McCormick at his near post. Marcus Maddison had ghosted past two challenges to create the crossing opportunity for the Posh teenager, who was aided by a huge deflection off Sawyer.

Jake Jervis was denied by a smart stop from Jonathan Bond by his near post moments later as Plymouth tried to create a swift response. McCann was punching the air in appreciation on 17 minutes after a wonderful crunching tackle from Grant to win the ball in the centre of the pitch.

Edwards fired wide on the turn with his left-foot on 22 minutes after a Maddison free-kick caused a bit of panic in the Argyle back-line. Carey was cautioned for a foul on Doughty as Posh tried to counter-attack at pace on 26 minutes.

Bond got a fingertip to a cross-shot from Sawyer on 33 minutes as the visitors threatened down the left. Jervis flicked an effort over the bar from a corner kick after it was nodded back across goal at the back post by Bradley.

Bond produced a superb double stop on 39 minutes to first deny Grant and then Sarcevic before Anthony Grant hacked the ball clear. Edwards stabbed wide of the target at the near post from an in-swinging Maddison corner kick as the half entered four minutes of stoppage time.

Posh doubled their lead a minute after the re-start, Marriott made wonderful progress down the right hand side, winning a physical battle and then squaring for strike partner MORIAS who made no mistake from close-range.

Bond produced another outstanding stop on 56 minutes, this time to deny Ainsworth after Baldwin had given the ball away in a dangerous spot. Marriott was denied by McCormick on 58 minutes after a fine run from left to right as Posh pushed for a third.

Bond produced another fine stop on 64 minutes to tip over a Bradley effort and less than 60 seconds later, Doughty was denied by McCormick after a swift counter attack led by the marauding Maddison down the left hand side.

Grant McCann made his first change on 68 minutes with teenager Idris Kanu introduced for Morias who worked his socks off and bagged his first goal of the season in his display. McCormick produced a fine stop of his own on 70 minutes to deny Marriott from close-range after Edwards had nodded a deep Maddison cross back across goal.

Da Silva Lopes then flashed a shot over the bar after a clever pass from Maddison. Maddison himself fired straight at the keeper after good work from Edwards as Posh continued to create chances in front of goal.

The visitors pulled a goal back on 77 minutes following a swift counter attack of their own, Gregg WYLDE tapping home from close-range as Posh appealed in vain for a free-kick on Maddison at the other end.

Danny Lloyd replaced a limping Maddison on 80 minutes and the final 10 minutes were helter-skelter at times, but Posh clung on for three points.