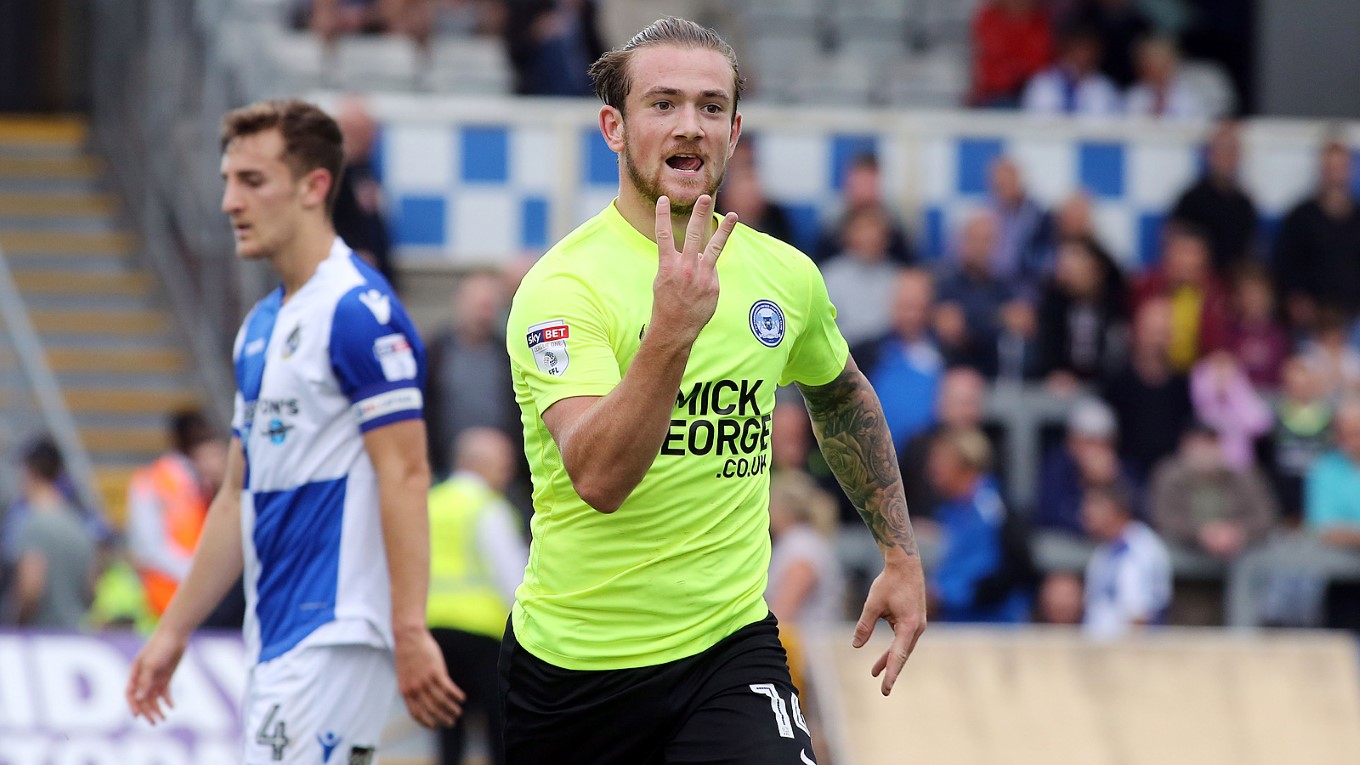 Wonderful away day for Posh at the Memorial Stadium.

Peterborough United put in an excellent display in front of just under 10,000 spectators at the Memorial Stadium as a brace from Jack Marriott and a first goal in Posh colours from former Newcastle United centre back Steven Taylor secured an impressive 4-1 victory.

Marcus Maddison saw an early effort from a free-kick strike the wall after he himself had been felled 30-yards from goal as Grant McCann’s men made a lively start in their third kit at a jam packed Memorial Stadium.

On six minutes, Posh made the breakthrough as wonderful work from Gwion Edwards down the left saw him cross low into the box, the defender failed to clear and MARRIOTT made no mistake, firing low into the back of the net.

Sercombe was cautioned for an obvious foul on Doughty on 13 minutes much to the frustration of the Rovers faithful. Edwards fired over a difficult chance on 17 minutes after a teasing Da Silva Lopes cross moments later as Posh continued to impress in the opening quarter.

Anthony Grant was harshly booked for his challenge of the match by referee Mr Kinseley. Nichols was denied by the near post by Bond and from the resulting corner, Posh attacked at pace, Maddison with a fine pass to Marriott who shrugged off the attentions of the defender, but fired wide with his left-foot.

Bond did well to gather a bobbling effort from Sinclair on 36 minutes as Rovers made decent passing progress across the midfield. Bodin cracked a shot against the top of the crossbar on the stroke of half-time as Posh just struggled in the final few minutes of the half to get the ball clear.

Bond denied Nichols by his near post on 48 minutes after the former Posh man found a bit of space down the right. Bond was at it again moments later as Sinclair let fly, the Posh keeper parrying the long-range strike to safety.

Harrison squandered a fine chance to equalise on 53 minutes after Nichols’ low centre picked him out at the back post, but the striker was leaning back and fired high over the bar. The lead was doubled on 56 minutes, Baldwin won the ball on the halfway line, fed Morias who in turn picked out MARRIOTT and the former Luton Town man slotted the ball pas t the keeper with his left-foot.

The hosts made a double change on the hour with Rory Gaffney and Byron Moore introduced for Harrison and Lines. Darrell Clarke made his final change moments later with Sinclair limping out of the action to be replaced by Ollie Clarke.

Bond made a superb stop to tip over a fierce Nichols effort and was then well placed to tip a header from Sweeney onto the bar before a deflected cross was tipped over by the overworked shot-stopper.

Grant McCann made his first change on 72 minutes with teenager Idris Kanu replacing Junior Morias in attack. Posh made it 3-0 on 76 minutes as a Maddison corner was flicked on by Baldwin and nodded home at the back post by TAYLOR from close-range.

Marcus Maddison was afforded a standing ovation as he was replaced by Chris Forrester on 79 minutes. The Pirates pulled a goal back on 84 minutes as a clipped cross to the back post was nodded into the back of the net by former Cambridge striker Rory GAFFNEY.

Andrew Hughes replaced Edwards as the fixture entered the final few minutes. Five minutes of stoppage time was indicated by the fourth official but Posh saw it out comfortably and added a notable fourth as Hughes fed MARRIOTT to complete his hat-trick.