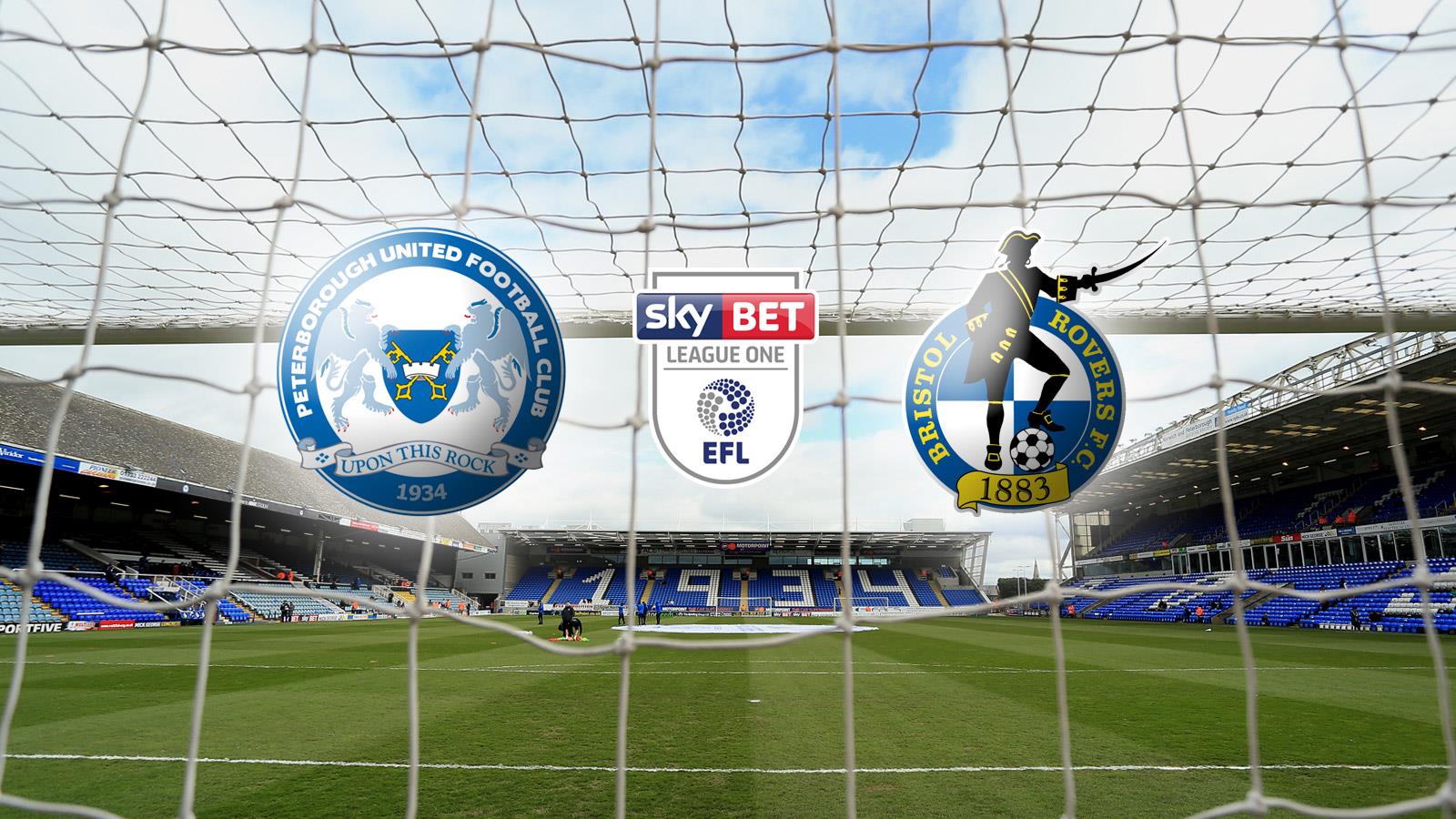 Peterborough United bring their ABAX Stadium campaign to close in a SkyB et League One fixture against Bristol Rovers this Saturday, with the curtain-closing fixture getting underway at 3pm.

For Posh, little more than pride and a strong finish are at stake, while our opponents, The Gas of Bristol Rovers, have a slim outside chance of nabbing the final play-off place from the division. They would need to win their remaining two games and hope that other results go their way for that fortune to be told, but the fact they are simply challenging is a wonderful achievement for a side that were only promoted from the tier below last season - Darrell Clarke’s men grabbing the final automatic promotion spot from League Two last campaign.

Furthermore, promotion this season would be their third-successive rise following promotion form the National League in 2014/15. There’s no doubt they’re a club on the up and Clarke has overseen the previous two successful campaigns, so they have stability at the top as well.

On-the-pitch and one thing becomes immediately clear when looking at the recent run of The Gas. They don’t like drawing! Indeed in the last nine outings they haven’t registered a single stalemate and with Posh also averse to drawing, we should expect a result either way here, based on form. Rovers last outing was a 1-0 success over Oldham, and bar a disappointing defeat away to Gillingham, they have some decent recent scalps, including Southend United and AFC Wimbledon.

Saturday’s opponents came into this season with the fourth-largest squad in the League One ranks, and in fairness to them, they’ve utilised a large number of those players throughout the campaign. It makes knowing what to expect a bit more of a challenge, but recent line-ups and formations do give us a few hints. At home, they nearly always favour a traditional 4-4-2, while on the road, they tend to experiment more in terms of how they line-up and personnel. 3-4-3 and 3-4-1-2 are both variations recently used by Clarke as he attempts to guide his side into a play-off position.

One player that has featured more than anyone else this campaign is arguably Rovers’ brightest young talent. Young Welsh centre-back Tom Lockyer is a player with real potential and the clubs captain at just 22 years of age. He’s already amassed 176 senior caps for Rovers after joining their youth ranks as a teenager and The Gas will do well to hold onto Lockyer heading into the transfer window, as he’s already gained some interest from higher-placed opposition. He’s represented the Welsh U21 side on seven occasions and is a shoe-in for senior caps in the future. Lockyer is great header of the ball and has impressive natural fitness – he never stops running.

The goals in this side have mainly come from attacking-midfielder Billy Bodin, who is another young Welshman having an impressive term. Bodin is top scorer with 12 goals this season and is usually found on either the right wing, or as a standalone number nine. Like Lockyer, Bodin has represented Wales U21’s on numerous occasions and after failing to make the grade at Swindon, has really found a home at The Memorial Stadium. Posh should expect a flair player in Bodin, someone with good dribbling abilities and someone who can take on his man with tricks and showboats.

Up front and Ellis Harrison makes it a trio of Welsh stars in the Bristol line-up. Harrison, like Lockyer, has come through the ranks at Rovers and gone on to forge a first-team place, while attracting interest from Championship outfits and the Wales U21 squad, who he’s appeared for on fourteen occasions, scoring three goals. Harrison is best utilised as a false nine, owing to his flair and pace. Like Bodin, Harrison is capable of scoring the impossible and would rather net an overhead wonder-goal, than a two-yard tap in. With young, exciting Welsh blood running through the spine of this Rovers team, Posh will need to be alert and switched-on for the full ninety minutes, as The Gas have plenty of players willing to punish any lapses in concentration.

A side note on the squad is that Rovers do currently have a Poshie in their ranks. Luke James is at the club on loan and has featured sporadically this campaign. The former Hartlepool prodigy has featured 23 times this season, but is yet to net a single goal.

Gaffer Darrell Clarke has become a real icon at The Gas, owing to his back-to-back promotions, coupled with the fact he’s seemingly pushing for a third this campaign. He’s a great young manager with real man-management ability and has a loyal fan base at The Memorial Stadium. His win rate can’t go unnoticed either. Taking into account his 162 games at Bristol Rovers and his 157 at his previous employers, Salisbury City, he has an incredible 50% win rate from those 319 career games – that’s one of the highest career win ratios out of any League One manager. As a comparison, current Posh top-dog, Grant McCann is at 40% off of 57 games.

Another Clarke is in charge of both sides in this one. Referee Richard Clarke takes the whistle on Saturday, in what will be his first trip to The ABAX Stadium. He’s overseen 24 games this season, in an equal split between leagues one and two and has averaged just fewer than 3 cautions-per-game, which is the second lowest in the division. He’s shown red three times this season, including two in two games back in December. He hasn’t officiated either side this campaign and you have to go way back to October 2015 for the last time he took charge of Posh. That was a 1-1 draw away to Port Vale in a game that saw Michael Smith cautioned.

An injury time Tom Nichols goal was enough to give Posh the points in the reverse of this tie at The Memorial Stadium back in October. Posh were pushed hard in that game and had to come from 1-0 down after Matty Taylor converted a second-half penalty. Shaquille Coulthirst equalised before Nichols 90th saviour. Bristol Rovers haven’t won in the last five meetings between these two sides and you have to go back to 2007 for the last Gas victory. Overall and the duo have met on 36 occasions, with Rovers winning 13, Posh 11 and 12 draws. The very first clash between these two was way back in 1938 when Rovers won 4-1 at home in the FA Cup.

In terms of Posh team news, centre back Jack Baldwin is set to return after illness while youngster Andrea Borg could also be involved. Lewis Freestone is expected to continue at left-back.

Interesting fact: Former England international goalkeeper Nigel Martyn became the very first goalkeeper to move in a £1million transfer, anywhere in the world, when he moved from Bristol Rovers to Crystal Palace back in 1989.

The Motorpoint Stand is closed for home supporters for this game due to the large away following expected from Bristol Rovers. The Family Stand, Main Stand and London Road Terrace all remain open as normal and tickets for this one are cheaper, for these areas of the stadium, if purchased in advance. Tickets are on sale at www.theposhtickets.com, via the Ticketmaster hotline 0844 847 1934* and in person at the ABAX Stadium Box Office.