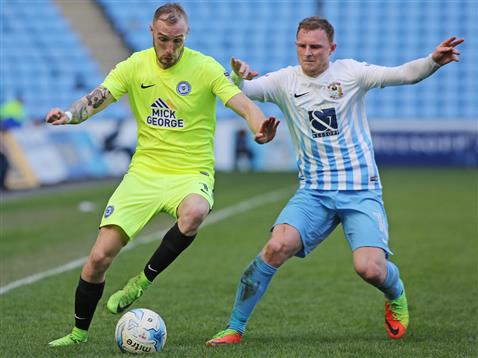 Coventry Give Posh Away Day Blues

Peterborough United suffered their first defeat in five games as struggling Coventry City secured a narrow 1-0 success at the Ricoh Arena on a day to forget for Grant McCann's men as a missed Craig Mackail-Smith penalty proved costly.

Ruben Lameiras saw an early effort deflect wide for a corner kick and the hosts forced three set-pieces in the opening exchanges, which were all defended well by Posh.

Marcus Maddison was denied by Burge at the other end on 12 minutes after a strong right-footed effort as Posh caught the hosts on the counter attack.

Smith saw a cross beaten away by Burge on 22 minutes after linking well with Maddison before a head injury to Beavon brought a stoppage and a chance for both teams to take water on board with the temperatures pushing 18 degrees in the spring sunshine.

Posh had a lucky escape on 27 minutes after an acrobatic overhead kick from Beavon struck the post. Lameiras then saw a low shot deflect wide for a corner kick.

McGee denied Turnbull at the second attempt moments later as the home side continued to create chances. Mackail-Smith found the side-netting with a volley on the turn from eight-yards after Samuselsen did well to keep the ball alive in the box.

Posh were awarded a penalty kick on 38 minutes as Samuelsen was felled in the box after a mazy dribble, but Craig Mackail-Smith saw his drilled penalty saved by the legs of Burge.

Beavon stabbed wide from close-range as the first half moved into three minutes of added time.

The deadlock was broken on 51 minutes and it was LAMEIRAS who had threatened throughout the game to date, who got his name on the score-sheet, firing low across McGee with his left-foot and into the bottom corner.

Samuelsen sent a glancing header wide of the target on 53 minutes after a fine left-footed Smith centre from the right.

Morias cracked the post with a shot out of nothing on the hour mark, Maddison's rebound was well gathered by Burge. At the other end, McGee did well to deny Beavon after Thomas had tricked his way into the box.

Posh made a double change on 66 minutes with Chris Forrester and Tom Nichols introduced for Grant and Mackail-Smith. Maddison volleyed over after a Binnom-Williams cross was only half cleared.

Morias wasted a golden chance to score on 79 minutes after being picked out by Taylor, but he planted his header straight into the grateful arms of Burge. Thomas was cautioned for dissent moments later.

McGee did well to deny Thomas after Bostwick's clearance struck the chest of Beavon on 82 minutes. Baldwin was cautioned on 88 minutes for a foul.