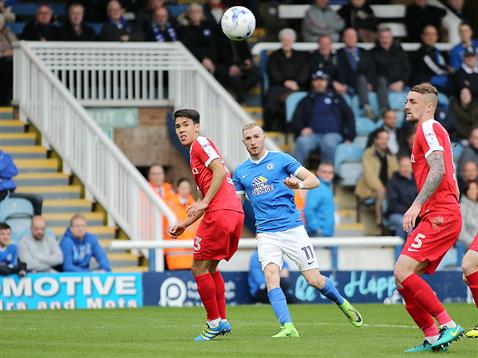 Marcus Maddison made one and then entered his name into the Goal of the Season contest with a sublime effort as Peterborough United secured back to back league wins with a 2-0 home success over Charlton Athletic at the ABAX Stadium.

Junior Morias failed to divert a corner from Marcus Maddison inside the opening five minutes at goal after he had timed his run to perfection at the near post.

Forrester tested Rudd with a curling left-foot shot on 10 minutes, which the keeper did well to hold.

Bostwick made a fine block to deny Novak on 16 minutes after the former Huddersfield Town front man found a bit of space in the Posh penalty area.

Novak was denied by McGee moments later as the Addicks continued to threaten in the spring sunshine. Baldwin did well to block a Holmes effort on 35 minutes.

Maddison was denied a fine goal by a superb stop from Rudd after linking well with Da Silva Lopes, who fired wide moments later after being picked out just inside the box by Morias.

On the hour mark, Craig Mackail-Smith replaced Nichols in attack as Grant McCann made his first change of the contest. Binnom-Williams was denied by Rudd by his near post on 61 minutes after a strong run and powerful effort.

Maddison curled a free-kick over the crossbar after a foul on Mackail-Smith before the visitors made a double change. Rudd made a fine reaction stop to deny Mackail-Smith from a low Maddison free-kick before the keeper made a more routine catch to deny Bostwick.

The deadlock was broken on 75 minutes and it was substitute Martin SAMUELSEN who powered home a header at the back post after a superb Maddison cross. Bostwick powered a header over when well placed moments later as Posh went in search of a second goal.

On 82 minutes, Posh made it 2-0 and what a goal it was, Marcus MADDISON with a sublime effort from a ridicolous angle, over the keeper and off the underside of the crossbar and into the back of the net.

Crofts was denied by McGee on 85 minutes as the visitors tried to get back into the game.