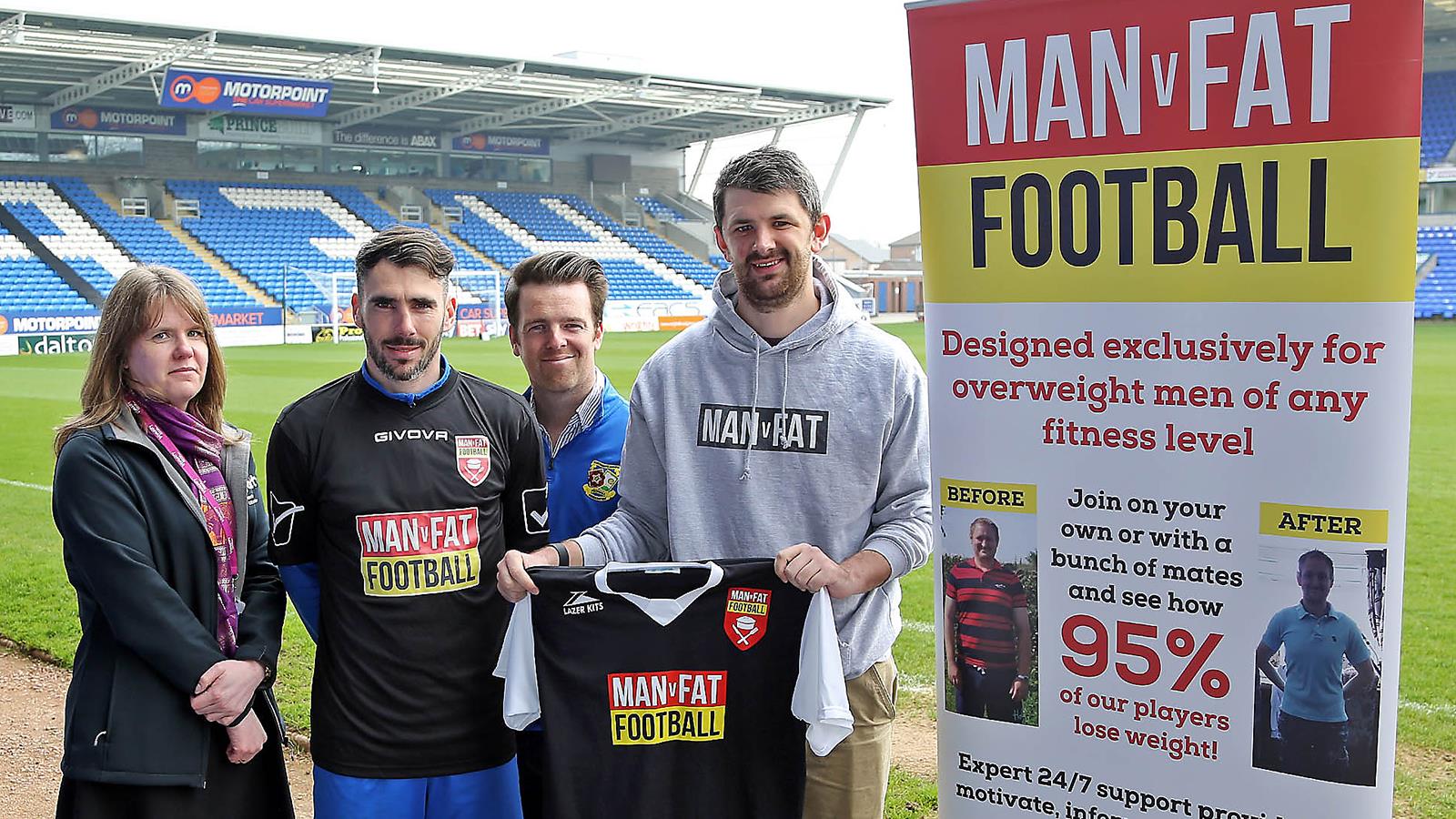 MAN v FAT Football – an FA-endorsed 14 week football league exclusively for the 56% of UK men who are overweight or obese launches in Peterborough from 24th April 2017.

The MAN v FAT Football scheme is for the very first time available in Peterborough. Local men who want to tackle their weight issues now have the chance to join this incredibly successful weight loss league. With 95% of players losing weight and some players losing up to 70lbs during the 14 week league, it’s no wonder that the Football Association have officially endorsed the leagues.

Set up by Andrew Shanahan, who himself lost five stone, MAN v FAT combines football with easy to follow diet and lifestyle advice as well as 24/7 online and offline support. There’s the traditional weigh-ins before each game, but this is then followed-up by a 30 minute game of six-a-side football. Extra goal bonuses are awarded depending on the pounds lost by the players, so it becomes a real team effort.

Andrew Shanahan, Managing Director of www.manvfat.com said, "We're thrilled to offer this to men across the UK. We've seen that MAN v FAT Football can have an incredible impact on the health of our players with 95% of players losing weight and 93% reporting health improvements from curing sleep apnoea to huge improvements in blood pressure and joint pain. Across 2016 our players lost more than 7 tonnes in weight and we know that we’re going to smash that in 2017 with leagues like the one in Peterborough”

Andy Dyke, National Participation Manager of Recreational Football at the Football Association said, “Football doesn’t begin and end with the professional game, there are different levels and styles of football played throughout the UK. MAN v FAT Football is a brilliant initiative for anyone who wants to address their weight and start working their way back into playing football. The results of the leagues are extremely impressive and we are excited to see the impact this could have on men’s health across the country and around the world. You might be thinking that your footballing days are behind you, but MAN v FAT Football is a great bridge back into the national game. The FA are happy to back the scheme and suggest that players visit www.manvfat.com/football to get started.”

Currently, there are over 20 million overweight and obese men in the UK, accounting for nearly 7 out of every 10 men. The issue of weight has become such a concern that a recent report suggested that the government should treat this as the number one public health concern. Despite this, funding has been cut to local authorities and men are nearly 300% less likely to get support for their weight than women. Despite this MAN v FAT Football is one of the only options for men who want to lose weight. Fortunately, with more leagues launching across the UK, men who want to lose weight and get back into football now have an opportunity to do something about it.

Chris Fenton, joined MAN v FAT Football in January and has now dropped over 5 stone, “MAN V FAT Football gave me a kick up the behind and made me realise how bad my health was. I was then put into a group of lads who all had the same goals to play football and to lose weight. It gives me a focus and a desire to lose weight and as the weeks go on I feel better about myself. I have more energy and for the first time I'm able to play with my kids without getting tired. I'm truly grateful for this opportunity and would recommend it to any man.”

MAN v FAT has been working closely with a number of organisations in Peterborough to bring this to the local area including Peterborough United Football Club, Northamptonshire FA, Vivacity Peterborough and Living Sport

MAN v FAT Football launches at Peterborough United Football Club from the 24th April 2017 and runs every Monday at the Vivacity Embankment Athletics Track 7pm-9pm from 8th May 2017 for the next 14 weeks. It costs £9.99 to register and games cost £6 per week. The only thing you have to lose is weight…

Players can join up at www.manvfat.com/football and they can get more information by calling 0845 163 0042 or emailing football@manvfat.com