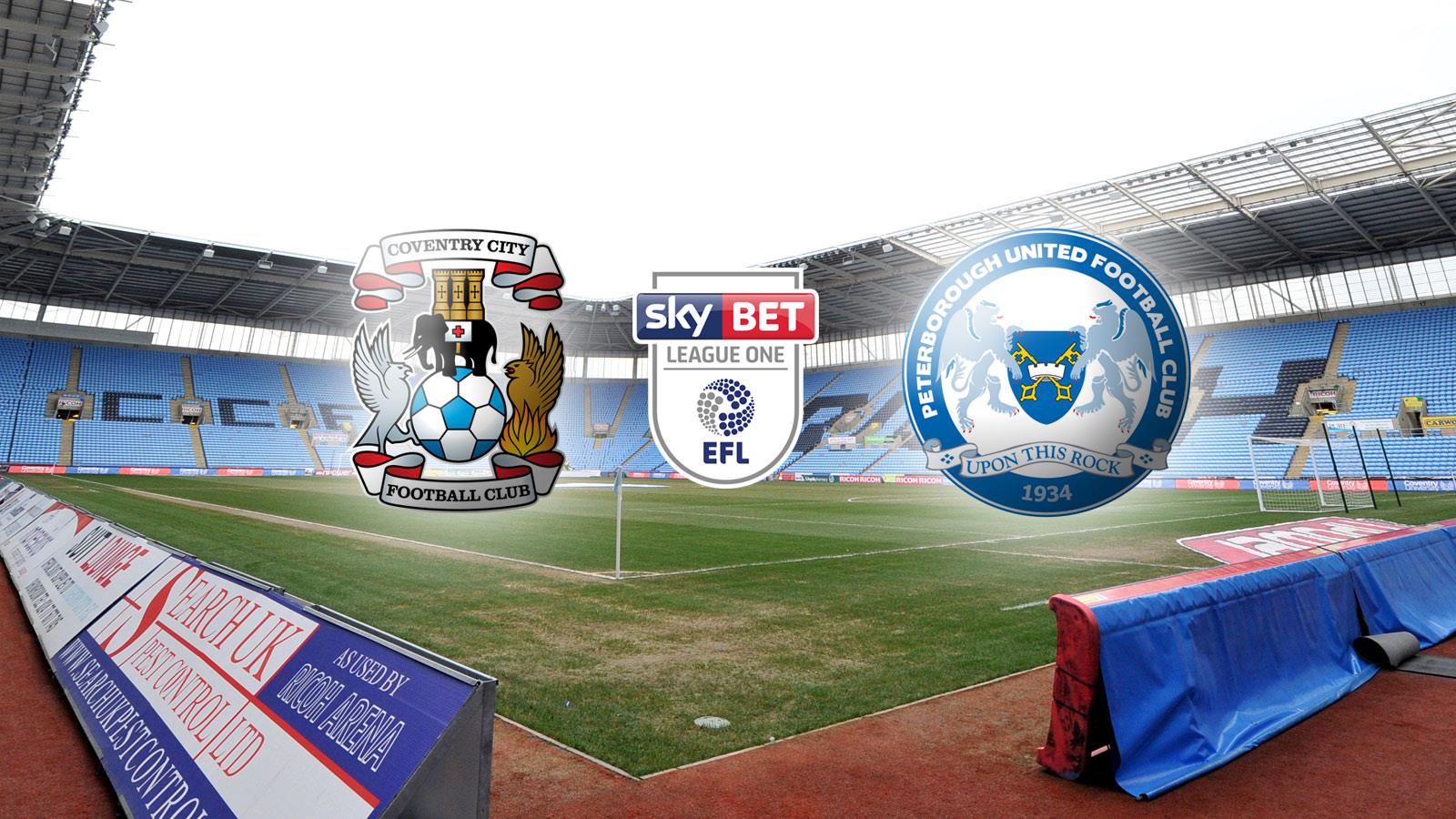 Tim Stoodley previews this weekend's trip to the Ricoh Arena.

Peterborough United enter their final handful of games this calendar season as they head west to Coventry City and a tie at the Ricoh Arena, this Saturday at 3pm - The Sky Blues currently sitting rock bottom of League One and will officially be relegated if they are beaten by Posh.

Despite a season with very little to write home about, coupled with problems off-the-pitch, the last month has seen as increase in fortunes for the west midlands outfit. Two straight league wins, gave them a very outside chance of surviving the drop, although most Sky Blue fans have already consigned themselves to League Two football next year. They also secured the Checkatrade Trophy after beating Oxford United at Wembley on Sunday.

Mark Robins, gaffer of the struggling side, has had the unenviable task of having to keep his side focused on the pitch, despite protests from supporters about off-the-pitch happenings. New to the job himself, his side have seen an upturn in proceedings under his management and he’ll be hoping to finish the season with his sides collective heads-held-high. He’s tinkered with formations since joining and has so far put out a 4-4-1-1, a traditional 4-4-2 and also a 4-5-1 – this makes McCann’s scouting job a challenge as it’s difficult to know what to expect from City.

As much as the formation and tactics on offer might be unknown, we do know where there is quality within the City ranks. Right-back and skipper Jordan Willis is a perfect example of a one-team player. His youth career saw him come through the ranks at the Ricoh before playing his way into the senior side. He became captain in the 2013/14 season at just 19 years old and he’s been the first name on the team sheet ever since. He’s a good header of the ball and is a threat when bounding into the area in search of a crossed ball. He can play on both the centre and right of defence and since his arrival, Robins has favoured him on the right side.

Goals have been hard-to-come-by this campaign and it’s veteran front-man Marcus Tudgay that leads the scoring tally with four goals. He’s a well-known name around English football with a host of Premiership and Championship clubs to his impressive CV. He’s brave, has good off-the-ball sense and despite his age possesses good natural stamina. It is touch-and-goal as to whether Tudgay will play against ‘Boro, as he looks to recover from an ankle injury, but if featuring, expect him to be a handful for the Posh backline.

On the creative front, and it’s Burundian Gael Bigirmana that is the main inventive outlet. He’s top assist-maker for this season, where he’s been pitched at centre-midfield, despite the ability to also play on the right wing. He’s a real engine that doesn’t stop working. A high-intensity work rate is matched with good stamina and pace, a genuine box-to-box midfielder that provides the power for the side in both attack and defence and one to mark-out of the game for McCann’s men.

Boss Mark Robins is in his second spell in charge of The Sky Blues. Back in 2012/13 Robins oversaw 33 matches for Coventry, winning over half of them. He is experienced and Saturday sees him take charge of his 400th professional game. In those 400 matches he has win ratio of around 38%. For comparison Grant McCann is at 41% for 54 games.

The reverse of this tie finished as a 1-1 stalemate back on New Year’s Eve on 2016. Skipper Jordan Willis scored early before an injury time equaliser from Michael Bostwick rescued a point. It wasn’t a classic and neither side did enough to warrant winning that tie. When Posh last came to the Ricoh, in October 2015, it was two late Adam Armstrong goals that consigned ‘Boro to a 3-2 defeat. In fact the only time Peterborough have ever won away to Coventry was the pairs first meeting back in 1961 – McCann will be hoping to end the unwanted 56 year record come Saturday. Overall the pair have met 20 times, with Coventry winning 11 to Posh’s five. Only once in those 20 meetings has a side won by more than two goals (Coventry won 0-3 in 1962).

The Ricoh Arena is like most modern stadiums, functional and fairly conservative in design. Posh fans will be located in the South Stand (blocks 6 & 7), which is in one corner towards the Lloyds Pharmacy Stand. The stand itself is quite steep so can take some effort to get to the top. Usually steep stands mean the action is close but not here, a large red track around the pitch pushes the action further away, meaning action at the opposite end can be hard to decipher.

If arriving by train, the stadium has its own Coventry Arena Station; however in a great piece of British planning, there is only one single carriage train which runs just once an hour on match days. As the carriage has a day time capacity of 150 (reduced to 75 in the evening) then personally I wouldn't rely on it to get to the Arena, as you may find that you are unable to get on it as it is already full. After the match has ended the station is closed to allow fans to disperse, meaning that you can't get a train back into Coventry until 6.28pm on Saturday afternoons. Alternatively, Coventry Railway Station is about three and half miles away from the stadium, but is quite a walk. Better to either take a bus or jump in a taxi (costs around £12 to and from the stadium).

Those arriving by car should note that the parking at the ground is permit holders only and the nearby retail parks are well policed on match days. There is two privately run car parks nearer the ground on Oban Road (CV6 6HH) and these can be pre-booked online and cost £4 per car. Head to ricoharenaeventparking.co.uk.

Once in the ground there are large concourses which are modern, light and clean. The usual suspects of food are available, with pies setting you back £3.50 and sausage rolls £3. Alcohol is also served inside the ground with a 500ml Carling lager costing £3.40.

Perhaps the most interesting part of the Ricoh Arena is the fact that there is a large Grosvenor Casino right next to the away turnstiles. This makes for a different pre-match atmosphere as you can head to one its two bars, while also partaking in casino games. They welcome away fans, but beware anyone under 25 will need photographic ID.

Interesting fact: Once powerhouses of English football, Coventry City paid £6.5million for Craig Bellamy back in 2000 from Norwich City. Going the other way and their biggest transfer received amount was £13million from Inter Milan for Robbie Keane, also in 2000.

Tickets for this game can be purchased in advance or on the day. There’s no increase if buying on match day. Prices are as follows; Adult £22, senior citizen 60+ £15, 18-21 year old £15 and under 18’s £10. Wheelchair disabled prices are the same as the appropriate age category. Coach travel is also available. Tickets are on sale at www.theposhtickets.com, via the Ticketmaster hotline 0844 847 1934* and in person at the ABAX Stadium Box Office.