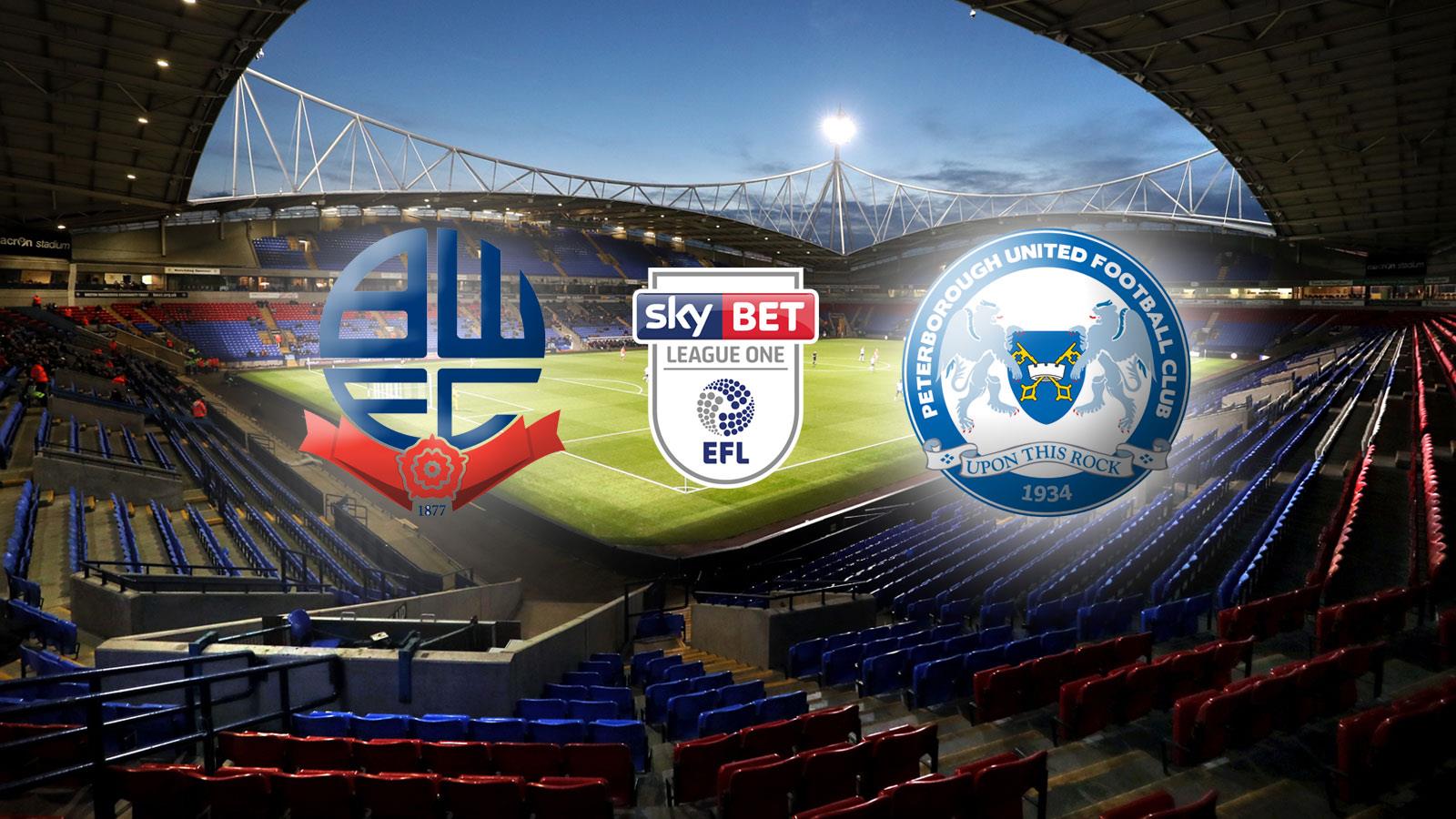 Tim Stoodley looks ahead to the final fixture of the season on Sunday at Bolton Wanderers.

Peterborough United look to play their part in a final-day promotion drama as they head to The Macron Stadium and the home of Bolton Wanderers, in their final Sky Bet League One fixture of the 2016/17 term. This one gets underway at 12 noon under the watchful eye of the Sky Sports cameras in the north-west.

The camera crews are there for one simple reason, a win for the hosts would see them snatch the final automatic promotion place and compete in the SkyBet Championship next season. A draw would also realistically see them up, with nearest rivals Fleetwood needing to win by more than eight clear goals if the Posh help to produce a stalemate.

A sell-out crowd will be expected at The Macron and pre-season, promotion would have been expected. They have the most expensive squad in the division and are a much bigger club than arguably any of their League One counter-parts. That said, they’ve done well across a tough campaign and have put themselves in the best possible position for an immediate return to the second tier of the English game. Their recent form, however, has been stuttered with just one win in their last five, but that victory came against relegation-candidates Port Vale and was a professional and relentless showing.

There are plenty of journeymen in The Trotters squad; in fact they have the highest average aged team in the division at nearly 28 years old. They’re full of match-winners and recognisable names and they’ll be looking for the squad elders to guide the team home in one final bout. Unfortunately for them, they’re meeting a Posh team with nothing to lose and plenty to gain. Nestled in mid-table, this game has no bearing on our final finish but is a chance for several players to empathise their position in the squad for next season and with the summer transfer window just weeks away; this is the final chance for them to do just that.

We can expect Bolton to pitch a 3-5-2 formation, whereby the wide players act as wing-backs. This is a popular formation with others this campaign and is the method currently employed by Premiership leaders Chelsea. The style of play is not too dissimilar to that of The Blues either, with quick, direct and lethal passing on display. They opted for a similar formation in the reverse of this tie, which was also on the Sky cameras, but that day they really failed to shine and the Posh midfield was able to boss with ease, more of the same come Sunday we hope. One of those wingback/midfielders to really have made an impact this campaign is Portuguese wide man Filipe Morais. He’s the clubs top assist maker this term and has been utilised regularly on that right side. Morais has real flair and has a natural aggression that he uses to ease past many League One wingers. He has a good technique with his cross and is quite happy to pop up with a goal or two as well.

Talking of goals and they also come from midfield, in the shape of Bolton thoroughbred Josh Vela. He’s a one-club player and has been at the club since 2008. He’s still only 23 and has a bright future ahead. His best attribute is probably his determination, but his tackling, passing and natural fitness abilities are also all notable. Interestingly, he started his career as more of a defender, but current boss Phil Parkinson has used him in more of an attacking role, to great success. He’s joint top scorer this campaign, sharing the spoils with striker Gary Madine. At the back and 27 year-old Mark Beevers is the first defender on Parkinson’s team sheet. Stout and reliable the former Sheffield Wednesday man has been the most used outfield player for The Trotters this campaign, playing just shy of 4000 minutes – he’s even chipped in with seven goals, all mainly using his immense height from set plays. Beevers is a great header of the ball and at 4ft 2” has a fantastic jumping reach.

Former Posh goalkeeper Ben Alnwick is in the squad and has featured over 20 times for The Trotters this campaign, more recently though he’s been acting as number two to fellow ‘keeper Mark Howard.

In terms of Posh team-news, manager Grant McCann is without the services of Gwion Edwards, Ryan Tafazolli and Jermaine Anderson. Andrea Borg and Junior Morias pressed their claims for a starting berth by scoring in the 3-1 reserve success at AFC Wimbledon on Thursday.

After joining in the summer, gaffer Phil Parkinson was given just one aim, to secure promotion back to the Championship, and that makes this weekend’s tie a potential career-defining one for Parkinson. He’s taken charge of 53 games for The Trotters and has impressively won half of them. In his total managerial career he’s taken charge of 652 games and has a win ratio of just under 40%. By comparison, Posh boss Grant McCann is at 41% from 58 games.

Northumberland based Scott Duncan is set to take charge of this one. He’s predominately used in the Championship, but drops down this week, perhaps owing to the gravity of the game for Bolton. Incredibly he’s officiated 36 games this season and has averaged 3 cautions per game – he’s also shown red on 10 occasions. He has been in charge at The Macron this season when he oversaw Bolton’s 4-0 win over Gillingham back in December, but you have to go back to August 2014 for the last time he officiated Posh. That was at The ABAX and was a 1-2 defeat to Sheffield United in League One.

A Michael Smith wonder-strike separated the two sides in the reverse of this tie back in November. The final 1-0 score line a totally fair reflection as Peterborough dominated the game. There isn’t actually a great deal of history between these two sides, with the pair having met just 10 times. Bolton has won 6 of these to Peterborough’s 3. Posh has never won at Bolton and has scored just three goals in four games at The Macron.

The Macron Stadium is a stunning ground, at least from the outside, and is totally enclosed from within. Built back in 1997 the ground can be seen from miles around and looks fantastic as you approach from the M61 motorway. Posh fans will be housed in the two-tiered South Stand. The bottom tier shared with home supporters, while the top tier is exclusively for travelling fans.

If arriving by train then Horwich Parkway Railway Station is the closest terminal and is just a couple of minutes walk away. It can get busy after the game, so be prepared for queue time. If driving in, you’re also in luck. There is a car park at the ground itself, at £7 each (£12 for minibuses), or alternatively there is parking offered on the surrounding industrial estates, for £4-£5.

On the pub front and the main away supporter pub is called The Beehive and is a 10-15 minute walk from the ground. It is a good sized pub that also serves food and helpfully, you can also park your car there, killing two birds with one stone. Alcohol is available in the ground, a larger will set you back £3.50, while a red or white wine costs £4. Also in the ground is the usual array of hot food and snacks. The pies are Holland’s ‘Bit Eat’ brand and cost £2.90. A hot dog will set you back £3.50.