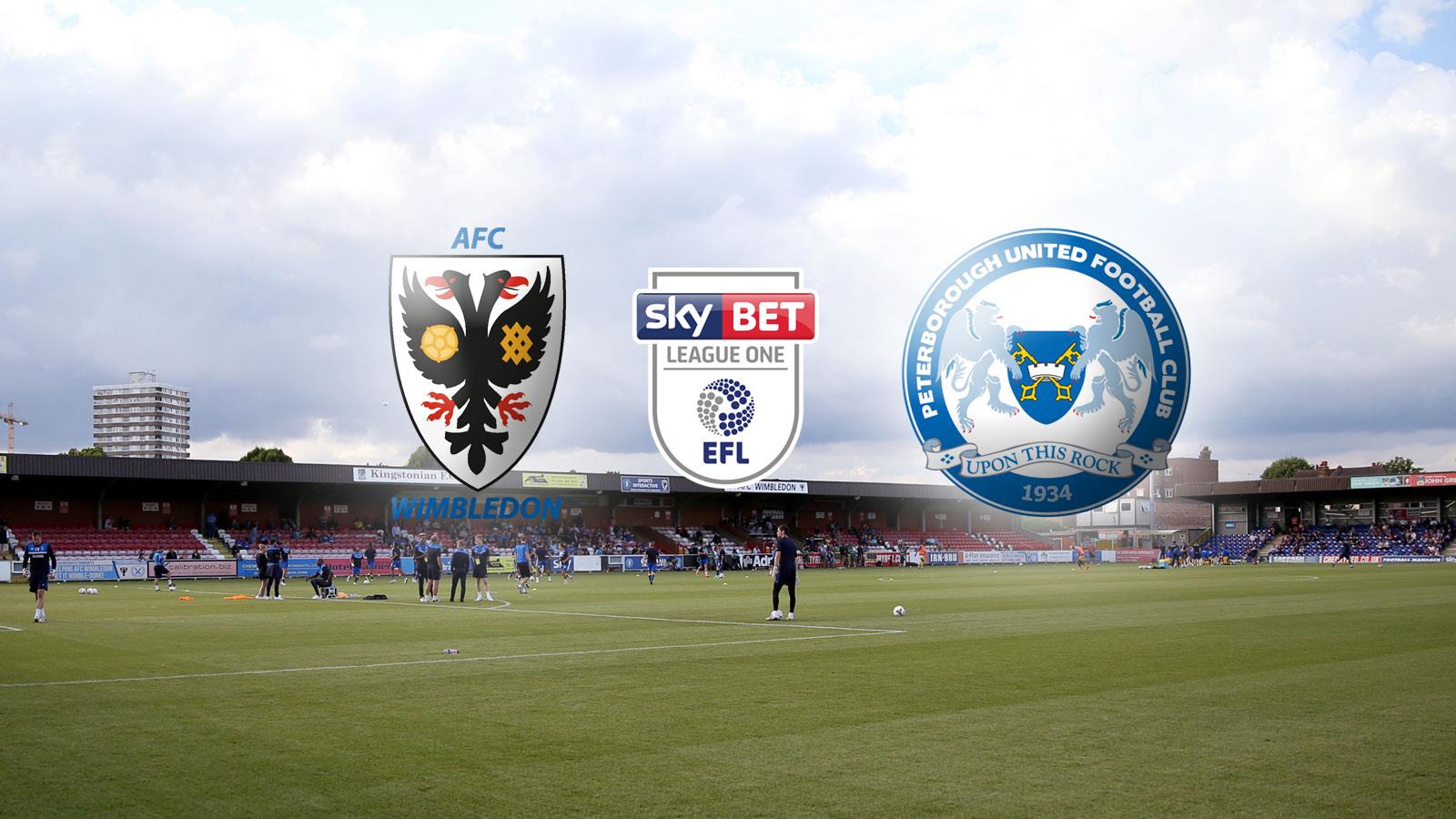 Peterborough United hit the road as they head south to The Cherry Red Records Stadium for their second game in four days. A tie with AFC Wimbledon awaits with both clubs nestled securely in mid-table and little more than pride at stake. This SkyBet League One clash getting underway at 3pm on Easter Monday.

Make no quarrels though, The Wombles will be looking to curtail a poor recent run and end the season on a high. They’ve won just once in their last six games, after a dull 0-0 draw on Good Friday. Neil Ardley’s men will be pleased with such a lofty finish after gaining promotion to League One last season, meaning this campaign will be the clubs highest ever league finish in their short history.

On the playing front, Ardley has his men well organised and well tuned and will be a difficult unit to break down. On the road they favour a traditional 4-4-2, but back at Kingsmeadow they use a 4-3-1-2 variant, which we’d expect them to punt on against ‘Boro. They counter-attack quickly and are revered for a disciplined, conventional and effective, albeit sometimes not-so-pretty, style of play.

Chris Whelpdale and Tyrone Barnett are two former Poshies that sit amongst the ranks at Wimbledon, although neither has featured regularly this season. The goals in the side come from regular front-man and Montserrat international, Lyle Taylor, who is the clubs top scorer, this campaign. The product of the Millwall academy is a real poacher and gets himself into some great positions to score. He’s got a good finish on him and works really hard off-the-ball.

Jake Reeves is one of the most capped players in The Dons ranks this campaign. The useful 23 year-old has proved a player with a ‘steady head’ since joining the side permanently back in 2015. He’s usually found in the centre of the park, but can be utilised on the right wing if required. A product of Tottenham and Brentford, he has real potential and is the engine of the side. It’s impossible to miss his incredible work-rate which has recently been likened to that of Chelsea superstar N’Golo Kante. He’s also a good passer of the ball and uses an impressive technique for someone so young. One for Posh to watch on Monday and one for everyone to watch in the future.

There’s immense experience at the back for The Dons in the shape of centre-back and 35 year-old Paul Robinson. The Millwall stalwart made over 300 career appearances for The Lions before eventually settling at Kingsmeadow. He’s an old-fashioned defender with a solid tackle, intense determination and solid bravery stats. He’s not had a regular centre-back partner all campaign so has had to adapt, but he’s the first name on the team-sheet for Neil Ardley and his coaching staff.

Experience runs into the dugout here too with gaffer Neil Ardley rapidly approaching 250 games in charge of his one and only club. His career highlight was of course sealing promotion from League Two last season and he’ll be delighted with how his side have bedded in to their League One journey. Ardley’s win rate at AFC Wimbledon isn’t really anything to write home about at just 33%, but he’s a likeable character and in the clubs short history has become a bit of an icon.

Darren Handley is the man with the whistle for this game; he was in charge during the Coventry v Charlton game on Good Friday which was delayed repeatedly with fan protests. He’ll be hoping for a smoother ride at the Cherry Red Records Stadium this Monday and is set to take charge of Posh for the third time this campaign. He sent off Ryan Tafazolli in our 1-1 stalemate with Shrewsbury back in September and then was the main man in ‘Boro’s 2-1 FA Cup victory over Chesham. He averages 3.5 yellows per game and has shown just two reds all season (one being Tafazolli).

Like Good Friday’s opponents, Fleetwood, Monday’s side have a very limited history against ‘Boro given their recent formation. We actually played AFC Wimbledon for the very first time when the pair met in the EFL Cup in just the second match of this season. That finished 3-2 to Posh and setup a tie with Premiership side Swansea. In the reverse league tie and a single Tom Elliot goal was enough to give The Dons all three points when the pair met back at The ABAX in October. That means this fixture will be just the third time the clubs have done battle, with all the history being made this campaign.

Youngsters Andrea Borg and Lewis Freestone made their debuts for a youthful looking Posh side against Fleetwood. With nothing but pride to play for with both sides here we should expect both teams to field players who would otherwise be fighting for their spots. Furthermore, with Grant McCann and the Peterborough management team looking to sit down and decide on outgoing transfers over the next few days, we could see changes here as McCann gives players the chance to play for the future.

The Cherry Red Records Fans Stadium is, alongside being a mouthful to say, one of the smaller grounds on the League One calendar. Holding less than 5000 it’s been renovated heavily as AFC Wimbledon have risen up the leagues, but it still needs to be treated as a non-league ground, with limited seating. Poshies will be located in the Rygas Stand Terrace and should have a whale of time. Terrace football is always a great atmosphere and the acoustics within the ground allow for a noisy day out. The main piece to note with this ground is that away fans can’t access the away terrace from the main entrance into the stadium car park. Instead, continue along Kingston Road (keeping the main entrance to the right) and take the next right into Jack Goodchild Way. Parking is available at the ground (although can fill up quickly, so arrive early) and there is limited nearby on-street parking.

If arriving by train, then note the nearest train station is Norbiton, which is a solid 15 minute walk away. The station is served by trains from London Waterloo via Clapham Junction and Wimbledon. New Malden station is also within walking distance of the ground.

If you fancy a pint before the match here, there are two bars located inside the main Paul Strank Stand, which away fans are welcome to enter. Otherwise, there isn’t a great deal near the ground itself, you could drink in Kingston or New Malden town centres and then bus or taxi to the ground. The 131 bus passes through both town centres.

Interesting fact: AFC Wimbledon has already acquired planning permission for a brand-new 12,000 all-seated stadium near the site of Plough Lane, which is where the original Wimbledon played their football. The ground, which is due to be opened in the 2019/20 season, would see football back in the London borough of Merton for the first time since 1991.