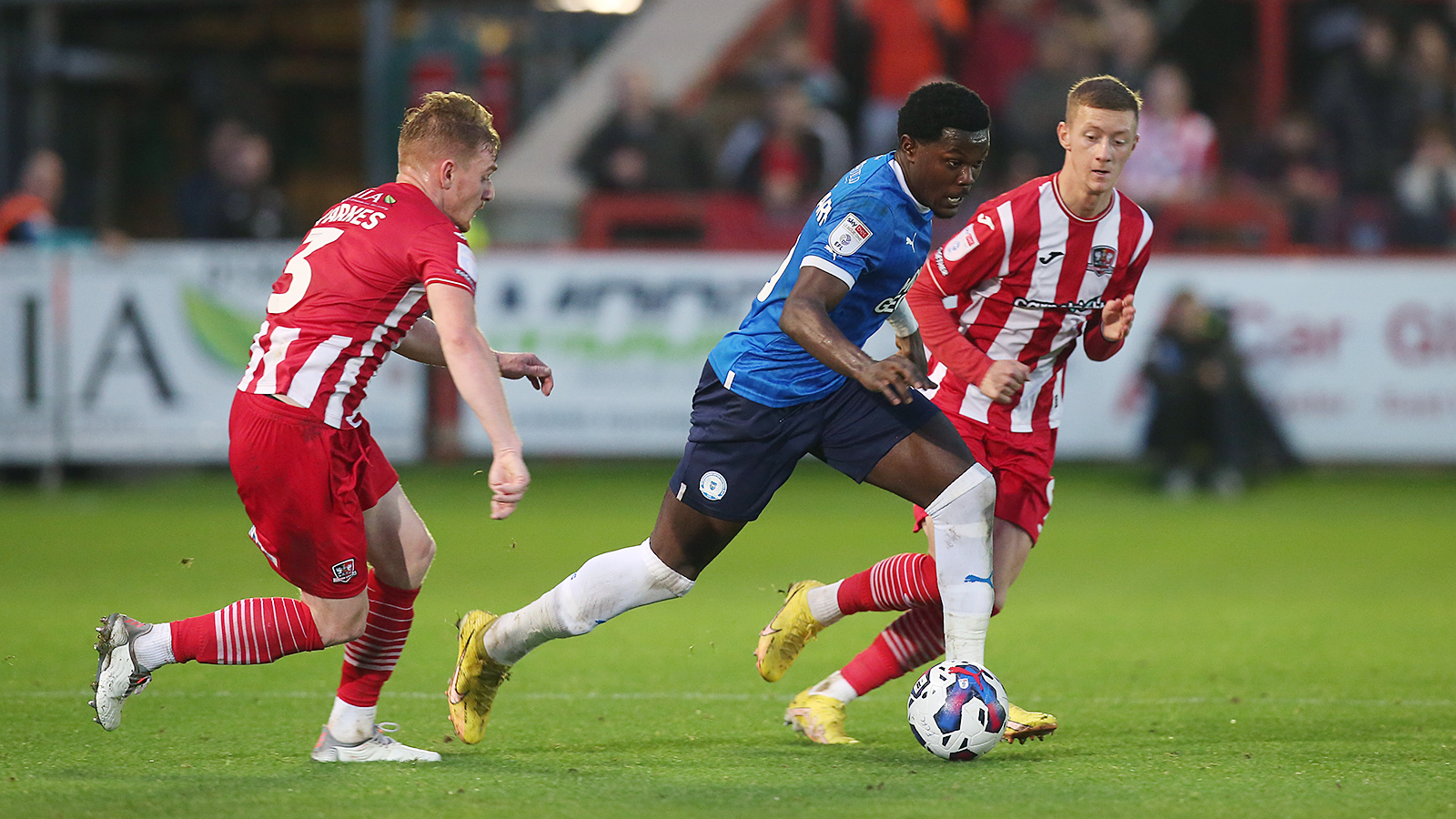 A late Jevani Brown goal sent Posh home from the South West with nothing despite a battling display from Grant McCann’s men.

Peterborough United suffered a late defeat at St. James Park as former midfielder Jevani Brown curled home a stoppage time winner after it looked like Posh had done enough to leave Exeter with something following a stunning volley from Ephron Mason-Clark.

Ephron Mason-Clark fired well wide of the target on eight minutes after finding a pocket of space 3-yards from goal but the opening exchanges were fairly combative with plenty of set-pieces dominating the action.

One-time Posh Academy player Jevani Brown curled a shot inches wide of the target on 13 minutes after the ball fell kindly at his left-foot after a bit of pinball in the Posh penalty area. Another man to develop within the Posh Academy, Harrison Burrows, tested Blackman from range and the keeper made a bit of a meal of it before eventually grabbing the loose ball.

Blackman produced a fine stop on 18 minutes to keep out a deflected Burrows effort, the keeper clawing the ball to safety after good work from Ricky-Jade Jones. The hosts came close to breaking the deadlock on 26 minutes as Collins saw a fine strike tipped around the post by Bergström but from the resulting corner kick, Tim DIENG nodded in the in-swinging corner to give Exeter the lead.

Posh carved out their best opportunity of the first half on 38 minutes as Thompson delivered a fine cross onto the head of Clarke-Harris, but the skipper planted his header wide of the target. Posh drew themselves level moments later and it was CLARKE-HARRIS with it, a fine strike with his left-foot across Blackman and into the back of the net.

Mason-Clark perhaps should have done better two minutes before the break from a Jack Taylor corner kick, but he headed over at the near post. Dieng was cautioned by the referee for a foul on Dan Butler on 54 minutes.

Jack Taylor saw a curling shot parried to safety by Blackman with Jones heading wide from the resulting corner kick from the right. The Grecians made a change on the hour mark with Sam Nombe replacing Matt Jay.

Sparkes was cautioned for a foul on Mason-Clark by the touch-line on 64 minutes, moments after a superbly well-timed challenge from Edwards prevented the hosts from breaking into space. Mason-Clark was denied by Blackman on 73 minutes before Grant McCann made a change with David Ajiboye replacing Jones.

On 82 minutes, Posh nudged themselves ahead and what a goal it was too, a deep cross from Thompson lashed home on the volley by Ephron MASON-CLARK at the back post. He was immediately replaced by Jack Marriott as McCann shuffled his pack again.

The lead didn’t last long though as a deep cross was nodded back across goal and substitute NOMBE was there to scramble the ball home. As the game moved into stoppage time, the home side snatched all three points as a long ball wasn’t dealt with and Jevani BROWN curled the ball into the roof of the net.