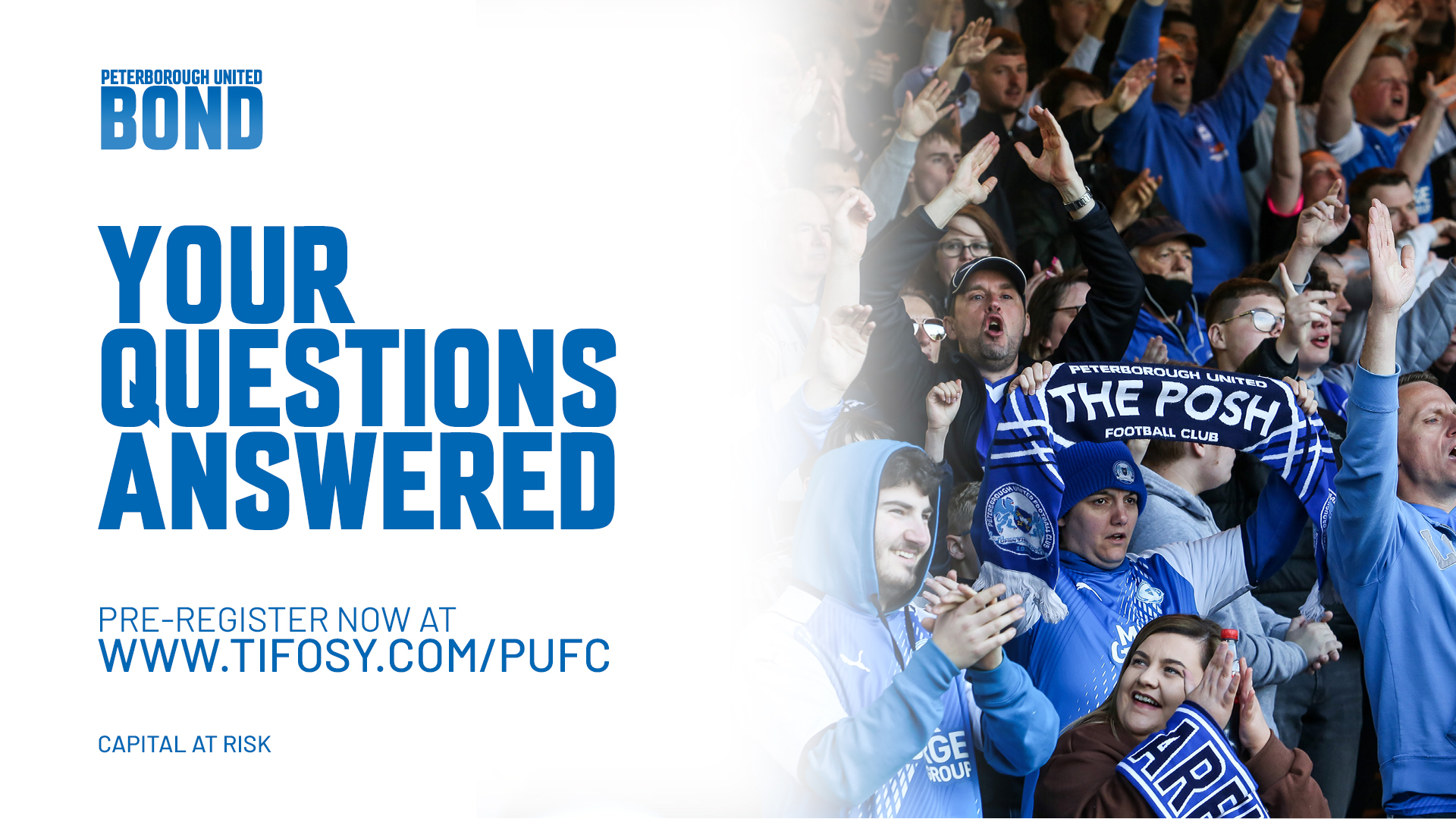 Since the launch of the Peterborough United Bond last week, we have seen a fantastic response with hundreds of supporters pre-registering. All those who pre-register before Sunday night will be granted priority access to the investment from Monday 16 May, for a whole week before the general public.

We have also received a number of questions from supporters. You will find the answers to a wide range of questions in the Bond Offer Document, which will be made available to prospective investors once the Investment Period opens on Monday 16 May for those who have pre-registered, or Monday 23 May for the general public. However, we wanted to answer a few of the most commonly asked questions already.

Why are you asking supporters to invest in a bond? Can the owners not put the money in?

The Club is not asking supporters to invest in the Peterborough United Bond.This is an investment offer, not an obligation – and it will not be suitable for everyone.

The owners have invested substantial funds into the Club with a focus on squad development and success on the pitch. If successful, the Bond will allow key projects to be funded without requiring the owners to divert resources from that primary focus.

Will the bond funds be ring-fenced so bond holders can see that the money is spent on the three projects identified?

Yes. The funds raised will be set aside for use on the identified projects exclusively.

Why are the raised funds being spent on safe standing and a sports bar at the Weston Homes Stadium when the club is moving to a new stadium within 5 years?

The reality is that while we will do everything in our power to make the new stadium a reality as soon as possible, the timing is not fully in our control. Ahead of the move, we need safe standing to protect our ability to use all four stands in the Championship, and we need to maximise our revenues at the Weston Homes Stadium. Importantly, the sports bar brings a new revenue stream and the business plan shows a positive return on the investment comfortably within 5 years thereby justifying the investment now. The Club will also seek to utilise both the safe standing apparatus and certain fixtures and fittings of the sports bar at the new stadium to further maximise return on investment.

Will the 9% p.a. interest be paid annually or rolled up and paid at the end of the bond term? The 9% interest will be paid annually on the same date each year of the term. Why such a high rate of interest? Does this mean the investment is very risky?

All investments carry risk. Investment into a security of this nature, which will represent unsecured debt of the Club once issued, involves risk and returns are not guaranteed.

The terms of the Peterborough United Bond have been designed to be fair both to the Club and to the investors and are consistent with other bonds issued by Tifosy: for example, Norwich City and Queens Park Rangers (both in the Championship when launching bonds) offered 8% return, with 25% bonus in the case of promotion to the Premier League. The slightly higher interest rate reflects the Club’s position in League One at the time of launch.

While the Bond is unsecured, it has some important investor protections built in, called covenants. You can read about these in the Offer Document. For example, these covenants prevent the owners from directing the bond funds to repay existing debt and trigger a full repayment of the bonds if half or more of the Club’s shares are acquired by a new owner.

Interested in the Peterborough United Bond? You can pre-register now at www.tifosy.com/pufc to receive priority access ahead of the launch to the general public.

Please note that investment in a security of this nature, being an illiquid investment, involves a substantial degree of risk and returns are not guaranteed. An explanation of the risks and the full terms and conditions is available at www.tifosy.com/pufc. Approved as a financial promotion by Tifosy Limited which is authorised and regulated by the Financial Conduct Authority (no. 717605).