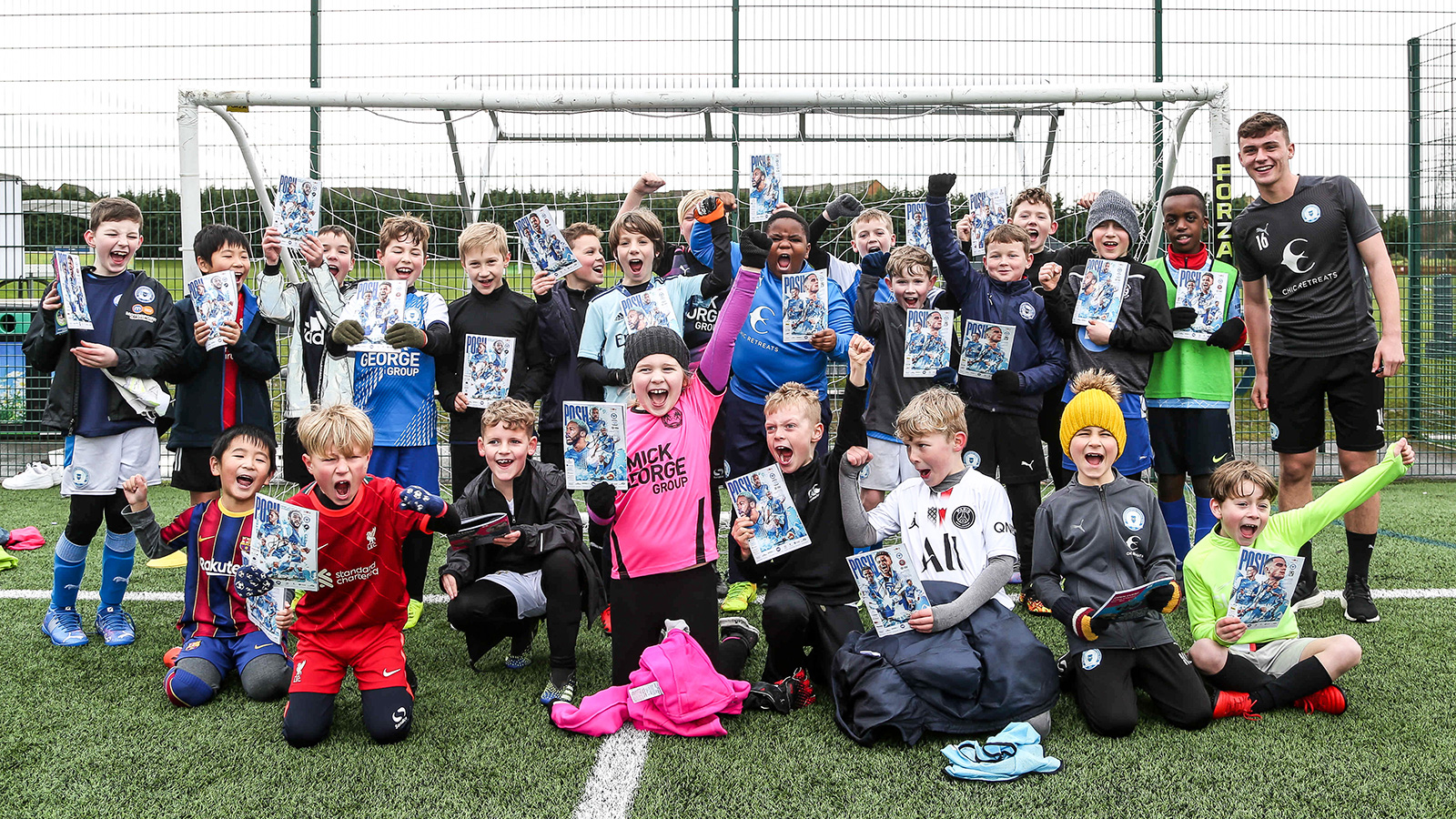 Burrows Pays a Visit to Half Term Holiday Camps

At Peterborough United Foundation, we recently ran our latest Half Term Holiday Camp in February, and we were lucky enough to be joined by Posh star Harrison Burrows, and Dave Palmer of the Professional Footballers Association (PFA), on one of the afternoons.

With the challenges set out by the COVID-19 pandemic, it’s been difficult for players to attend events such as this in the last couple of years, but with the easing of restrictions, we were grateful to Harrison for giving up his time to come and speak to, have photos with and sign autographs for the children at our camps.

“It’s fantastic to see the players back out and engaged now. It’s been a real positive thing to see players up and down the country being able to engage in their local communities, after such a long period without this sort of thing. And for someone like Harrison, who came through the academy at Peterborough and has had a really good start to his career, it’s great because he’s the kind of player these children will idolise and look up to.” Said Dave Palmer of the PFA.

COVID didn’t stop Peterborough United and the Peterborough Untied Foundation from being proactive in trying to positively impact the lives of as many local people as possible, with several events, projects and sessions being held virtually.

Peterborough United Foundation also enlisted the support of a number of the top English female footballers to provide words of support to our Girls Scholarship Team, ahead of their CEFA Women’s Cup Final in June 2021. Steph Houghton, Millie Bright, Rachel Daly, Beth England and Kelly Smith MBE all sent good luck messages for the girls, whilst Jill Scott sent a signed picture to wish the girls luck.

In person, Posh and the Peterborough United Foundation were still looking to do as much as they could, with Charlie O’Connell and Benjamin Mensah visiting a free to attend Key Stage One session back in August 2021.

Palmer said: “Posh have always done well with getting players involved in their events, even during COVID by doing things online. Joe Ward’s online Q&A was hugely inspiring. His route into the EFL from non-league isn’t seen as the conventional route so it was brilliant to get his take on things and for the young people he spoke to, to see that you don’t have to start at a top club to have a good career in the sport if you really work hard.”

Burrows’ positive impact on the children at our Holiday Camps was clear to see. The children lined up for photos, autographs and to speak to the Posh midfielder and it felt like a true return to normal. Palmer was keen to praise Burrows for attending the event and is hoping many other footballers will follow suit up and down the country.

“It’s encouraging from a PFA point of view to see players out at events like this. It’s been challenging getting players out to events across the country over the last couple of years due to COVID so it’s brilliant to see it happening again now and I’m sure everyone will benefit from it.”

“We have members in the mens and women’s teams and we’d like to see all those players get engaged in some way because they’re hugely influential figures in society now. The impact they can have on the younger generation is bigger than it’s ever been and it’s something that we hope will continue and happen more often across the country, moving forward.” Palmer concluded.

Our thanks go to Harrison and Dave for attending our February Half Term Holiday Camp. Peterborough United Foundation are looking forward to continuing to run such events and are excited to have the Peterborough United team involved in what we’re doing!