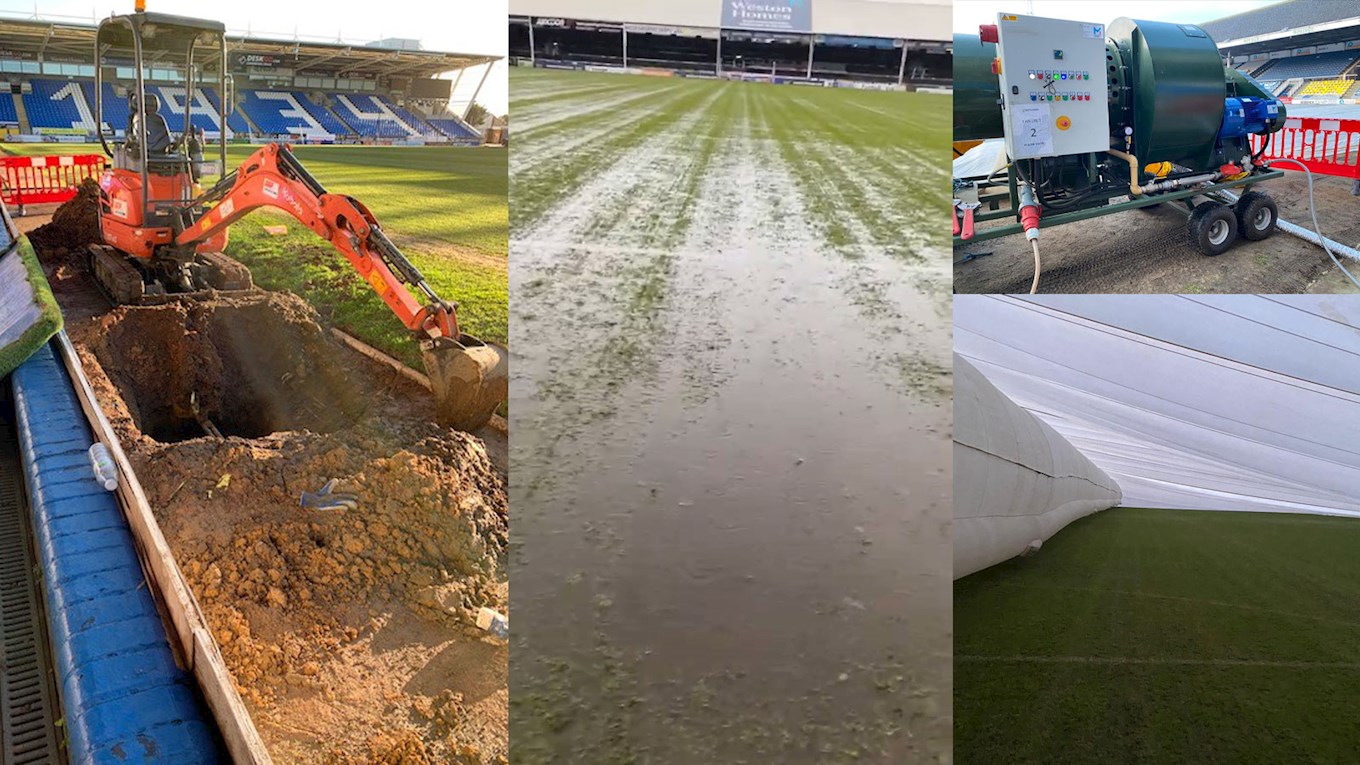 Pitch in recovery as drainage issues compound major water leak at the stadium.

Just before Christmas, the football club identified a burst water main at the Weston Homes Stadium stemming from a six-inch pipe close to the Main Stand and were able to rectify that issue that was causing damage to playing surface, but ongoing issues over the festive period has led to numerous challenges for the on-site team.

With the weather taking a turn for the worse as Storm Bella struck and the pitch showing signs of continuing challenges, the club investigated further and found drainage issues from the substantial gallons of water that had gathered underneath the playing surface.

Stadium manager Dawn Brittain explains: “During December, we had exceptional rainfall and coupled with the burst water main pipe, gallons of water was ultimately stuck with nowhere to go underneath the playing surface because we had discovered through Dalrod, numerous blockages with the drainage pipework.

“Dalrod used cameras to show what was occurring and it soon became very apparent that the force of the leak had pushed through debris into the drainage pipework under the pitch as well as blocking the side drains. These were cleared, but understandably given the sheer volume of water, the pitch was left severely damaged.

“Over the festive period, we were fortunate to enlist the support of a host of people to get to the bottom of the issues and how we could rectify the damage. I would like to thank Stile Construction, who initially located the leak by excavating the cinder track near the home dugout, Dalrod for identifying the problem and subsequently clearing our drains and Flogas and Vanguard who have additionally provided support.

“However, a lot of credit and thanks must go to our Groundsmen from idverde who have worked tirelessly over the Christmas period and continue to do so on repairing our pitch and managing the system. It has been a huge challenge. We looked at several different options to us and on Christmas Eve, we asked Sports Stadia to install a tent system to help with the recovery of the surface.

“Essentially these tents allow us to blow hot air onto the surface to aid with its growth and the drying out process. These tents have been used elsewhere, including Wembley Stadium and although it has been a challenge logistically because a number of places were understandably closed over the Christmas period, we now have this up and running.

“The playing surface will improve over a period of time, but understandably it has taken a battering due to the issues we uncovered, but hopefully we can look forward with optimism that the future can be brighter.”

Dean Tingley, Senior Project Manager at idverde said: “The tent itself is under 24-hour supervision. It has been placed over the pitch to allow us to create our own micro climate. Ideal growing conditions for turf require Air, Light, Water and temperature and using this tent we have been able to recreate some of these elements. Blowing hot air into the tent is allowing us to have the temperature under the tent at 10 degrees 24 hours a day, any warmer and we put ourselves at risk of turf disease.

“Sunlight at the stadium has always been and still is an issue. The family stand side of the pitch is always a challenge, maintenance wise, as that part of the pitch doesn’t see sunlight for six months of the year. That side of the pitch can be up to five degrees colder than the other side at times meaning our team are in some respects managing two different pitches. Using the tent, we are at very least able to raise the temperature consistently across the whole pitch to aid with seed germination and block out any potential frost.

“As we are able to have this temperature consistent for 24 hours a day it will help with the recovery process which is welcome at this time of the year with the Weston Holmes Stadium being a very cold site in general. Although the tent is a massive help keeping rainfall off the pitch and raising the temperature, it also presents challenges. The tent takes roughly two hours to uncover the pitch completely, and two hours to place back on again. Making day to day operations (aeration, fertilising, cutting, watering) limited.

“Growing a pitch in from seed in peak summer conditions can take 6-8 weeks so as you can imagine doing it in the winter is an even bigger challenge. Our staff have been absolutely tremendous throughout this period and continue to monitor the pitch constantly. A huge credit must go to head groundsman Dan Milgate and his team of Matt Wright and Sean Rodulson.

“They have worked tirelessly over the Christmas period with night shifts monitoring the tent and covering/uncovering the pitch to complete operations and ensure that the pitch is making an element of progress each day. A simple task, such as fertilising, which would usually take one hour is now taking five hours due to having to move the tent on and off the pitch.

“We are monitoring the pitch using pitch testing equipment standardised by UEFA to produce an audit and report. The pitch itself is making minor improvements each day. Although it may not look as easy on the eye as it usually does, the playing quality of the pitch is still at 90% of its peak playing conditions which is testament to the club’s investment in a Hybrid surface.”