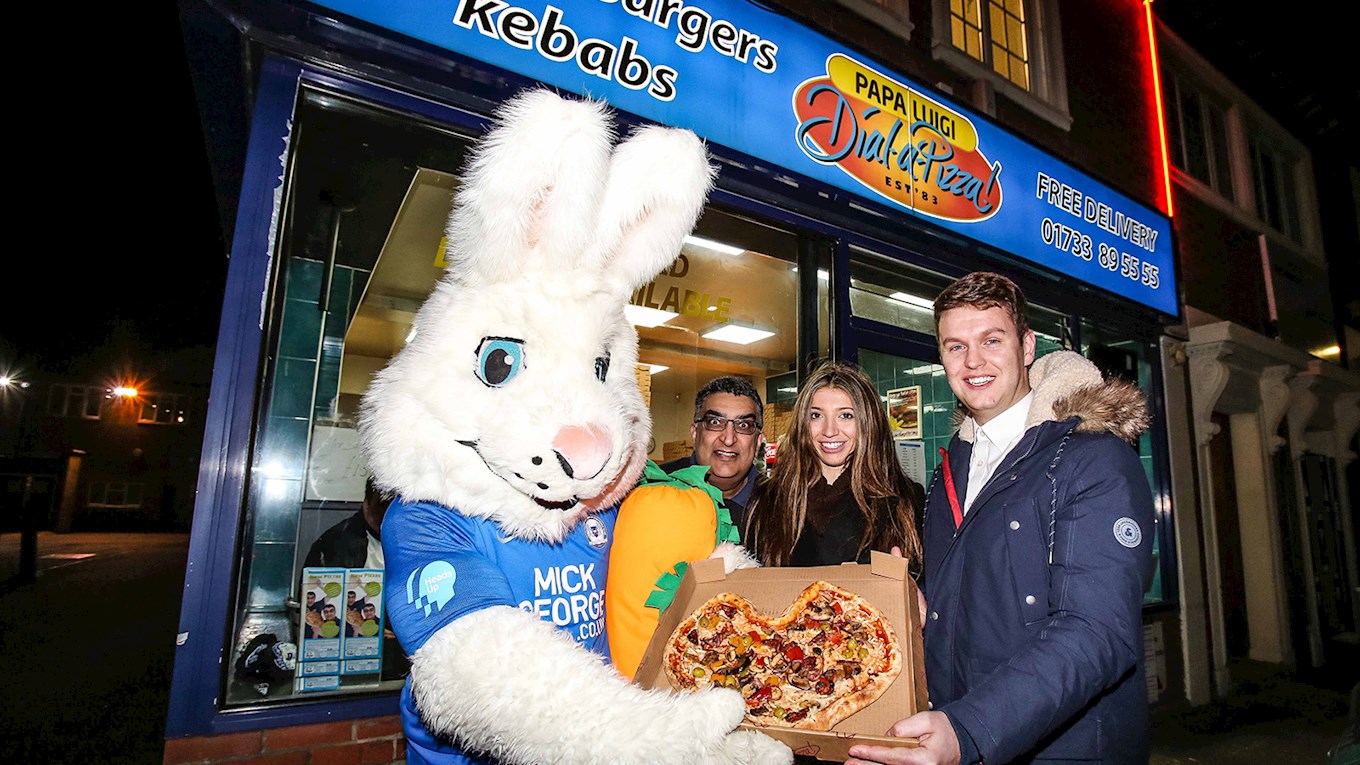 All You Need Is Love!

Love was in the air when Posh fans James and Kaela popped in to Papa Luigi London road for a heart shaped pizza, presented by non-other than club mascot “Peter Burrow”, Posh's lovable rabbit.

Both have become strong Vegan advocates and they put in a request to Vic Curry the Papa Luigi franchisee in Peterborough to order their Heart shaped pizza and Vic thought it was such a lovely idea he asked the couple to pop to the shop for some fantastic photographs to help promote his new Vegan pizza.

They jumped at the chance as they also realised it would be a good opportunity to promote the Vegan ethos and all it stands for. They attended the Southend game where Vic made them a huge heart shaped pizza with all of their favourite toppings on before posing for pictures.

Kaela commented “James and I are thrilled with our photos as the heart shaped pizza is not only a sign of our love for each other but also a celebration of how Mother Earth can bring forward wonderful food for our platters without hurting or harming a single animal on this Planet.”

James added “The shoot was such good fun and it was clear how many children love Peter Rabbit as they kept coming up and hugging him. The day was rounded off with a 4-0 victory and that was our evening complete.”

“I know Papa Luigi do sell meat products but I can also see Vic is using his influences to promote vegetarian pizzas which by the way taste yummy and even better if it’s Vegan. Vic’s new pizza is awesome with toppings like wild mushrooms, sun dried tomatoes, aubergines and lots more blended in a Mediterranean marination, we were thrilled with it.”

Not only did the young couple enjoy a yummy pizza but Peter Burrow is also a Vegan and when his official duties were completed he put his carrot down and got stuck into his favourite pizza, the “Veganito Pollo”

Vic informs us his Vegan pizza has been a huge hit “I know how our pizza ovens roast all the vegetables to perfection and creates a wonderful taste but we were struggling for a quality Vegan mozzarella but I have now nailed that and went back to one of our original vegetable specials with loads of different toppings on and this lovely couple helped test it for me, heart shaped of course.”

Vic is also organising  an official launch party for his very special pizza and all the local vegans will be invited to the Posh bar to test the “Veganito Pollo”, he is also organising merriment and mirth with a comedian, poet and singer, hosted by no other than Peter Rabbit, all who support the Vegan cause.

A big well done to Vic I am sure he will get many more heart shaped pizza requests and we hope the Vegan pizza goes from strength to strength.