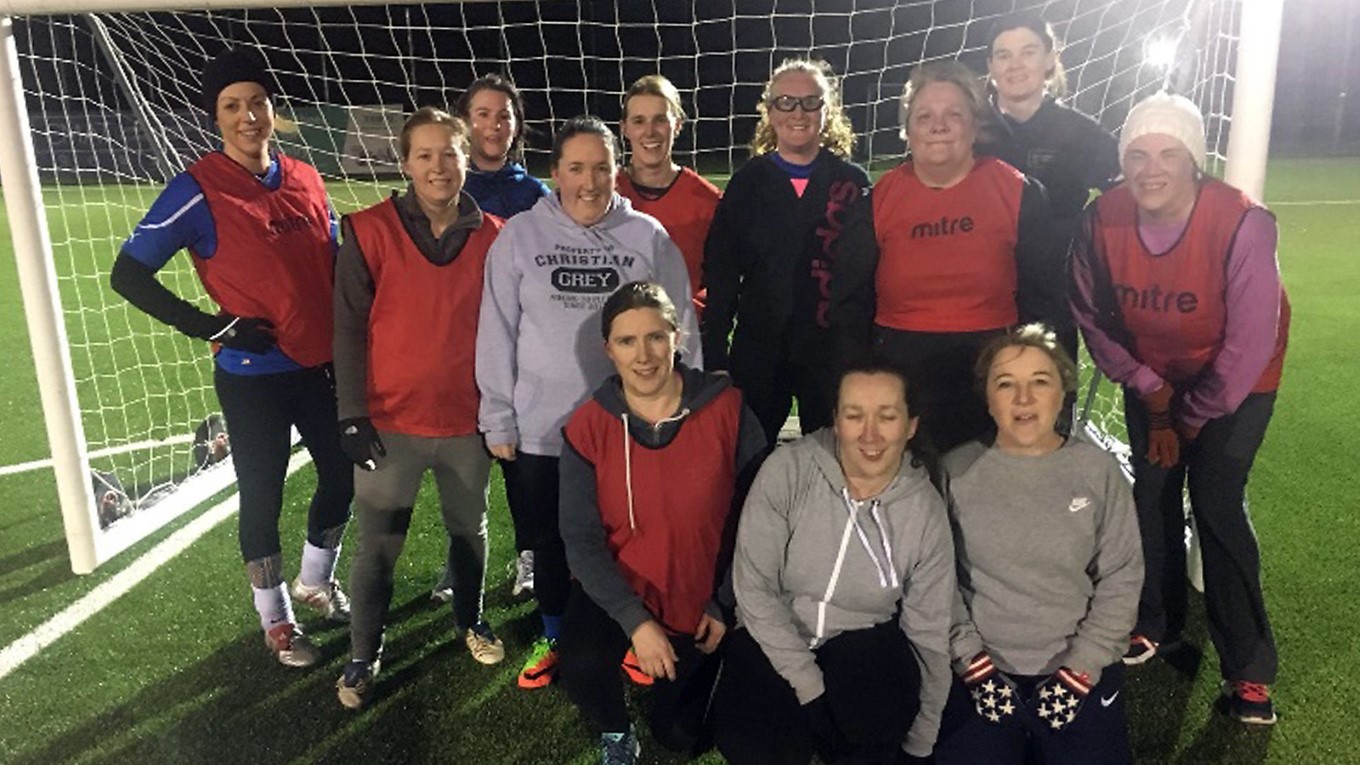 This academic year Peterborough United have created a new, exciting session through the Premier League Girls Project which has had a lot of attention.

The session which originally started as 18+ and eventually changed to 35+ session in the final block of the season. It was an opportunity to allow ladies that were 35+ to participate in weekly football to build on their football skills as well as increase their fitness. This session ran every Monday from 6.30-7.30pm at Nene Park Academy and focussed on the fun, social element of football. The session is delivered by FA qualified coaches who base the sessions around the 4-corner model covering physical, technical, tactical and psychological aspects of the game.

Sue Glasgow, a lady that attended the 35+ session from the beginning, as well as helping promote to gather additional players, started playing football from a young age around 12 years old. From the years of 1994-2009 Sue played for various football teams around the country such as Peterborough Pythons, Peterborough United Ladies, Middlesbrough and York.

Sue gained an interest in football as she was brought up in a football orientated family, and being the only female sibling, she took a strong interest in football very quickly. Sue said: ‘I used to love playing football with my family, especially in the back garden with my brothers. Then I started playing for the football team at school and when I got older and started to enjoy the game more, I joined local grassroots clubs’.

Sue stopped playing football at York in 2009 due to incidents of bullying which she received off various people in her team. She struggled to maintain motivation and enjoyment for the game as she was playing with people that weren’t always kind. Sue soon developed depression and anxiety due to social problems she had established through playing football and felt she had to stop. After moving back to Peterborough shortly after, Sue was asked to play again for a local team, however, her confidence was too low after the problems she had suffered with at previous clubs. Sue said: ‘It was a huge shame because I really enjoyed playing, my skill levels were improving dramatically and I was physically fit and active and then my confidence dropped and I didn’t want to continue playing.’

Sue started volunteering at a local Secondary School in Peterborough starting in 2017 delivering football after school clubs and started growing an interest for the game that she missed. Playing was still out of the question but her confidence was slowly growing. In the final block of our PL Girls sessions, we changed the session to 35+ to allow ladies from different backgrounds to turn up and play football in a fun, sociable environment. Sue found our session advertised online and decided to come along one session to see how she would get on. Sue’s technical ability was noticeably very good and she seemed calm and collected when in possession of the ball. She explained that she had gained weight since stopping so she was determined to gain some fitness out of the session and lose weight, as well as improve her footballing skills.

The PL Girls session was the first time since 2009 she had thought about getting back into football so she approached a little nervous but once she started passing a ball around with the other ladies, she started to relax and enjoy the session.

After interviewing Sue, she gave a list of reasons as to why she wanted to get back into football and she felt the founding of the 35+ session had really pushed her into participating in football every week. As Sue began regularly attending the session, she became more confident in her ability to play, she was very effective and strong on the ball, she had great communication skills with the other players and was very welcoming to new players to the session. Sue said: ‘I have really missed playing football and after seeing this session advertised I thought I’d be perfect. It lets me relive the old memories of playing which is a really good feeling to have’.

Sue worked hard in the sessions and was very committed to attending, the physical aspect of the four-cornered model started as a struggle for her as she had been away from football a long time. Over the 10-week block, Sue’s physical strength improved and this was noticeable through her passing and shooting. The coach worked on aspects of the game that Sue wanted in order to help her improve overall.

The session often composed of a topic, followed by a game related practice. The topics covered dribbling, passing, shooting, tackling, defending 1v1 so all attacking and defending elements were delivered. Sue’s shooting ability improved very quickly, with her power and accuracy getting better and this in turn helped her build confidence. Sue said ‘the ladies at the session have been fantastic in helping me, they have been really supportive and friendly towards me and it’s definitely helped me gain my confidence back and feel a love for football again’.

The psychological corner of Sue’s game improved the most after the depression and anxiety problems she developed whilst playing football. The session she quoted gave her ‘freedom from her stressful family life’ and ‘helped clear her mind’. Socially, she created some very good friends from the sessions, with them meeting up at social events outside of session when it didn’t run on bank holidays. Sue has noticed the health benefits the session has had and it’s helped her lose weight and she then found the motivation to continue losing. Next season, Sue is excited for the plans to grow the session and potentially organise fixtures and tournaments.

Overall, Sue’s development from first attending the session to the end of the block has been a huge success for her as a person, she has grown a love and passion for the game since stopping and she has gained many benefits from participating in the 35+ session.