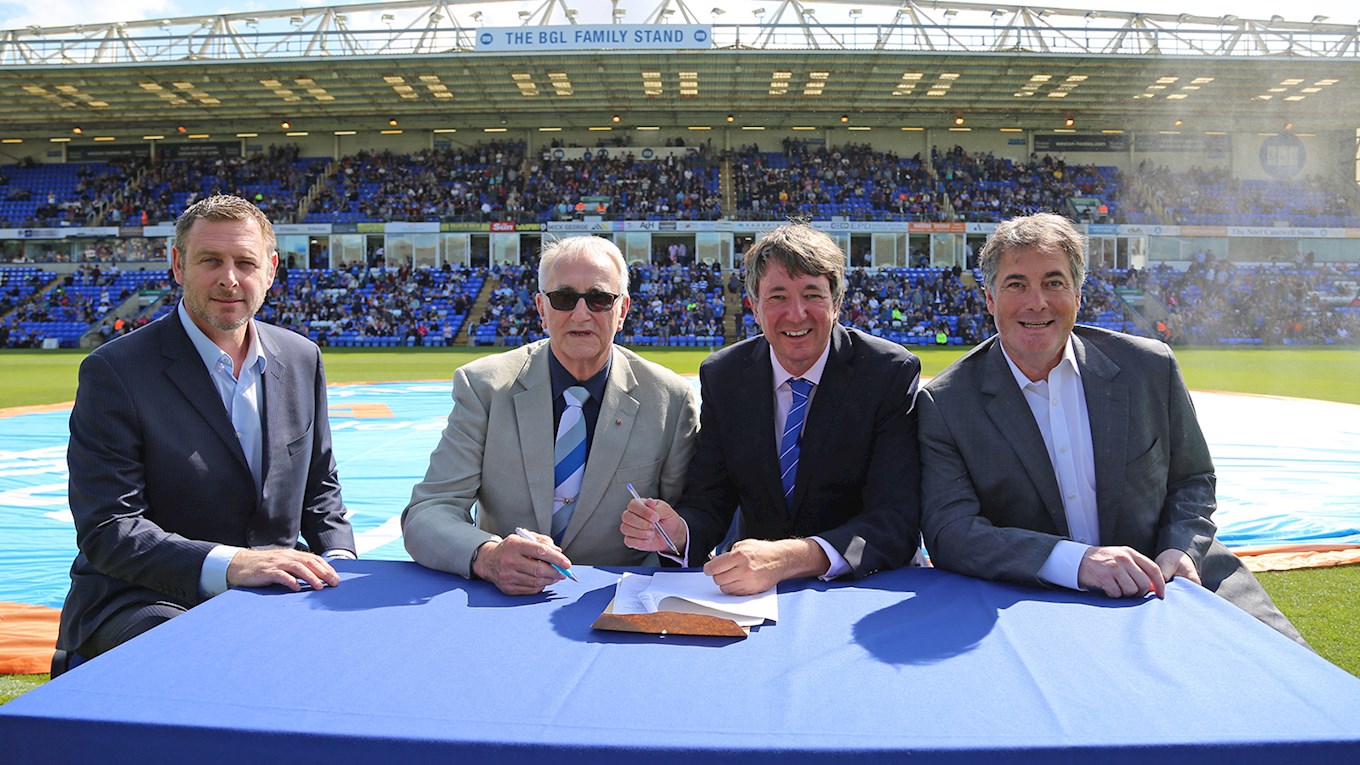 The Weston Homes Stadium is now a step closer to being back in the control of Peterborough United Football Club, following a Head of Terms on sale, which benefits both the club and the city.

Today (17 August 2019), in front of thousands of Posh supporters, Councillor John Holdich, leader of Peterborough City Council shook hands with owners, Darragh MacAnthony, Dr Jason Neale and then R. Stewart Thompson from Peterborough United Football Club as the final details of the sale were agreed, returning the stadium to Posh.

The council will be retaining much of the surrounding land it bought as part of the original deal, including the London Road car park. The Vista development land on which 295 carbon neutral homes were built is also excluded from the sale.

This, combined with the rent paid by the club over the past nine years and ongoing council tax payments and business rates mean the total return on investment of the deal so far stands at £3.9million.

The completion of the sale is now expected to take place later this year, roughly 10 years after the council bought the ground and surrounding land from a property developer to unlock the potential of the site and to secure the future of the football club in its long-term home.

Councillor John Holdich, said: “As a lifelong Posh fan, I’m thankful that the city council was able to step in and purchase the club back in 2010, to stop it being bought by investors outside of the city. It was originally our aim to sell back to the club at a later date for the same price.

“However, we have been able to greatly exceed our expectations in terms of our return on investment as well as delivering wider benefits for the club and the city as a whole.”

The council has so far made a £3.9million return on investment following the purchase of the club for £8.4million back in 2010:

Cllr Holdich added: “The city council has, and will continue to, work closely with Peterborough United to the benefit of the city as a whole. The club is an intrinsic part of Peterborough’s national identity and brings in over £7million of revenue to our city each year. It boosts our tourism, improves fitness, creates local jobs and improves the health and wellbeing of over 1,000 young people from all communities each week.”

The Posh co-owners, said: “We would firstly like to say thank you to Peterborough City Council for the opportunity and support they have extended to the football club to allow us to make this unique decision and bring the ground back to the ownership of the football club.

“This represents the next step in the journey to securing the long-term aspiration of Peterborough United and is a critical part of our redevelopment vision for the future. We have been working in partnership with the City Council to get to this point and we are sure our supporters are pleased and excited about this latest development.

“There is a little time to go before the final contracts are exchanged but both parties are committed to concluding this process as soon as possible.”

The sale includes the stadium and the Allia Future Business Centre, but excludes the surrounding land, which has been used to create additional city centre carbon zero housing.

The club and city council will continue to collaborate in future years with the planned creation of a Peterborough-based learning accelerator focusing on sports science, digital arts, software, and other technologies traditionally not found in the eastern region. An accelerator implementation plan will be presented to the community for input by autumn 2020.

Also planned is an angel investment network, to help business entrepreneurs associated with the learning accelerator get matched with investors to help them realise their ambitions.